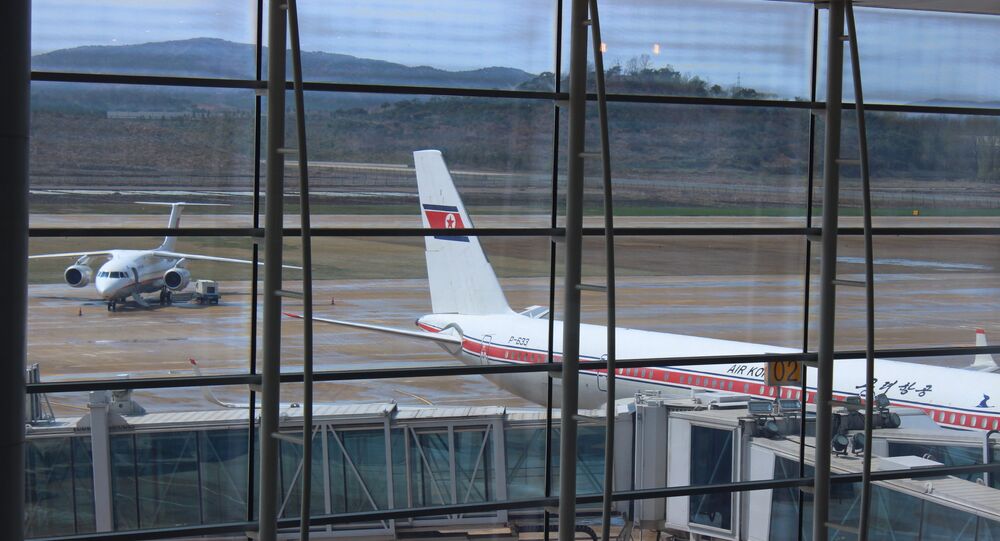 According to the Yonhap News Agency, an Air China airplane was detected departing from the airport in Pyongyang at 08:30 a.m. local time.

North Korean leader Kim Jong Un has arrived in Singapore ahead of a historic summit with US President Donald Trump.

The two leaders shared a historic handshake in front of reporters before retreating to private quarters for one-on-one talks.

According to the statement, the Singaporean prime minister noted the "bold and admirable" decision of the US and North Korean leaders to organize a bilateral summit and expressed his hope that the event will contribute to peace and stability on the Korean peninsula.

Traffic on #Singapore’s busy #Orchard shopping belt has come to a standstill amid reports that #KimJongUn has landed in the country for the #TrumpKimSummit. The #NorthKoream leader is said to be staying at St Regis hotel round the corner. pic.twitter.com/toKO2RkE0h

The popular plane tracking online source Flightradar24, however, reportedly did not specify the destination of the aircraft. The website has also not detected any other flights departing from North Korea. According to Yonhap, many government-chartered planes are known to keep their routes secret due to security issues.

© AP Photo / Jin Danhua/Xinhua
Military Escort: Chinese Jets to Secure Kim Jong Un’s Flight to Singapore Summit - Report
According to Reuters, one more plane has departed early on Sunday from North Korea for Singapore, cargo jet Ilyushin-76 (IL-76). According to media reports, a cargo plane is believed to be carrying food items as well as several cars to escort Kim Jong-un. The flight tracking service has also reportedly shown that IL-76 landed shortly in Guangzhou in Southern China before being airborne again likely heading for Singapore.

Kim Jong-un took reportedly only one known overseas trip by air since becoming the North Korean leader in 2011. The IL-76 cargo plane has accompanied his personal Ilyushin-62M jet to China in May.

Meanwhile, US President Donald Trump has also departed for Singapore, where he is expected to meet with the North Korean leader on Tuesday, the White House said on Saturday. Trump took off from Canada on Saturday, after participating in the Group of Seven (G7) summit, and is expected to arrive in Singapore on Sunday.

The US-North Korean summit will mark the first-ever meeting of the leaders of the two countries. The highly-anticipated talks were put at risk following Trump's May 24 declaration that he was canceling the meeting with Kim over Pyongyang's hostile rhetoric. Last week, however, Trump reinstated the summit after meeting with Kim's top aide, Central Committee of the Workers' Party of Korea Vice Chairman Kim Yong Chol, at the White House.