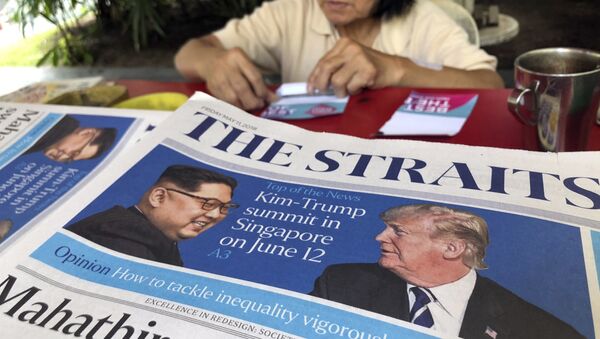 WASHINGTON (Sputnik) - US President Donald Trump has departed for Singapore, where he is expected to meet with North Korean leader Kim Jong-un on Tuesday, the White House press corps said on Saturday.

Trump took off from Canada on Saturday, where he participated in the Group of Seven (G7) summit and is expected to arrive in Singapore on Sunday at 8:35 p.m. local time (12:35 GMT).

The US-North Korean summit will mark the first-ever meeting of sitting leaders of the two countries. The high-anticipated talks had been put at risk, when, on May 24, Trump announced he was canceling the meeting with Kim over Pyongyang's hostile rhetoric.

However, last week, Trump re-instated the summit after meeting with Kim's top aide, Central Committee of the Workers' Party of Korea Vice Chairman Kim Yong Chol, at the White House.

The meeting has become possible due to a significant thaw of tensions on the Korean Peninsula. In January, Kim decided to initiate talks with the South Korean side amid the Pyeongchang Winter Olympics, while the relations further improved in April, when the North Korean leader met with South Korean President Moon Jae-in in the truce village of Panmunjom at the border between the two Koreas. The two leaders agreed to rid the peninsula of nuclear weapons and sign a peace agreement this year.