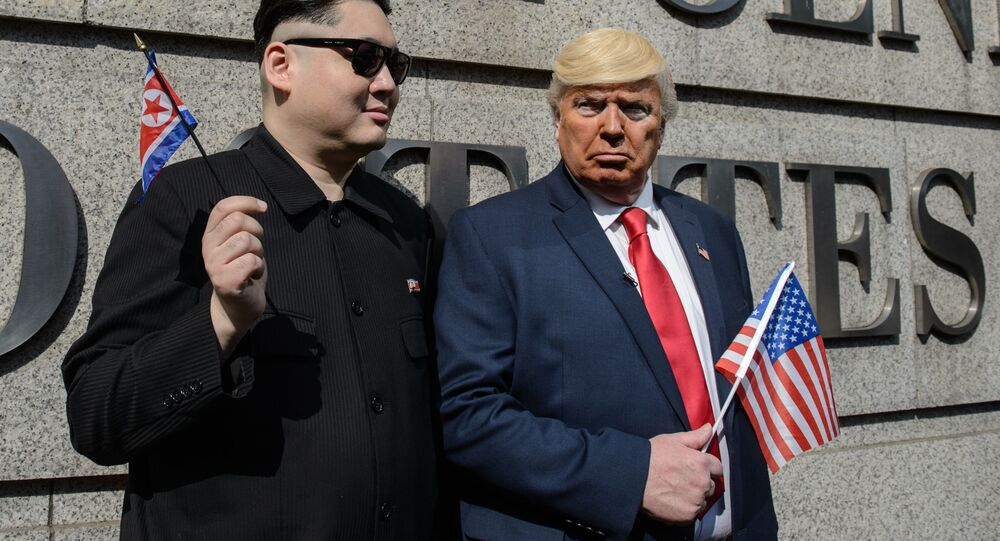 “The leaders agreed that the North Korea-US summit scheduled for June 12 must be successfully held and reaffirmed their wish to closely cooperate on denuclearization of the Korean Peninsula and establishment of permanent peace,” South Korean President Moon Jae-in said at a press conference following the summit at DMZ on Sunday.

© AP Photo / Wong Maye-E
Trump Reaffirms Commitment to Meet Kim Jong-un in Singapore
The president also pointed out that the fourth inter-Korean summit had been initiated by North Korean leader.

Moon Jae-in also said that both leaders believe that the Trump-Kim summit must be held. Moreover, South Korean President said that Washington and Pyongyang needed a direct dialogue to settle all the differences in the bilateral relations.

“As both [North Korean] leader Kim and [US] President [Donald] Trump sincerely hope for the successful North Korean-US summit, I pointed out the need for the direct dialogue between the parties for removing any existing differences as well as holding enough consultations on urgent issues, which must be raised during their summit,” Moon said.

"When I explained [to Kim] the results of my meeting with US President Trump held this week, I submitted him a message that Trump firmly hopes to put an end to hostile relations between his country and North Korea as well as to boost economic cooperation between the countries, if [North Korean] leader Kim decides to fully denuclearize [the Korean Peninsula] and keeps his promise," Moon stated.

Moreover, Moon Jae-in expressed hope to hold the trilateral summit between South Korea, North Korea and the United States in the future.

"If the US-North Korean summit is held successfully, I would like to see the wish and attempts to officially end the Korean War through the trilateral summit between South Korea, North Korea and the United States," Moon said at a press conference. However, the president added that the consensus on the date and place of the summit had not been reached yet.

Moon Jae-in also stressed that Kim Jong-un has reaffirmed his commitment to complete denuclearization of the Korean Peninsula during the talks with his South Korean counterpart.

© Sputnik / Ilya Pitalev
Blowing Things Up For Peace: WATCH N Korea Destroy Its Nuke Testing Ground
“Kim Jong-un has once again reaffirmed his commitment to full denuclearization of the Korean Peninsula and pointed out his wish to end the history of war and confrontation by holding the North Korea-US summit and [engaging in] the cooperation to [reach] peace and prosperity,” Moon said.

However, North Korean authorities still have doubts whether the country can trust US promises to provide Pyongyang with security guarantees in case of full denuclearization, Moon Jae-in emphasized.

"Kim Jong-un has doubts whether his country can trust US promises to end hostile relations and provide security guarantees in case of implementation of full denuclearization [of the Korean Peninsula]," Moon stressed at a press conference.

In addition, South Korean President Moon Jae-in said that North Korea and the United States should establish a direct hotline.

“The hotline allows making and receiving calls immediately. Such a hotline has recently been established between South Korea and North Korea. We believe that it is necessary to establish a hotline between North Korea and the United States,” Moon said at a press conference.

Pyongyang's ICBM tests have been a source of great concerns and tensions between North Korea and its closest neighbors, Japan and South Korea, as well their allies, including the United States. However, on Thursday, DPRK has dismantled three test mines at the Punggye-Ri nuclear site.

White House: US Team Still May Head to Singapore to Work on Trump-Kim Summit