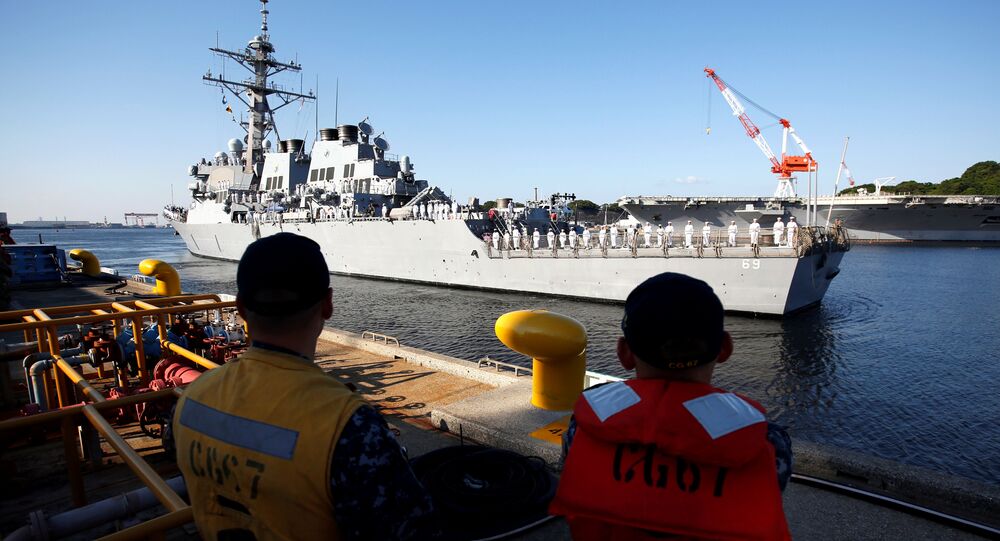 The state-of-the-art US guided missile destroyer Milius is touted as part of the US Navy's first line of defense in East Asia to contain a possible missile strike by North Korea.

The USS Milius has arrived at Yokosuka Naval Base in Japan to "support security and stability in the Indo-Pacific region by bringing enhanced missile defense capabilities," according to a statement by the US Navy.

One of the most advanced warships of the US Navy, the Milius is thought to be part of the US's first line of defense against a potential ballistic missile attack by North Korea.

The vehicle's deployment comes ahead of high-level talks in Singapore between US President Donald Trump and North Korean leader Kim Jong-un scheduled for June 12.

On May 16, North Korean First Deputy Foreign Minister Kim Kye-gwan made it clear that Pyongyang would reconsider its upcoming meeting with President Trump over provocative statements by US high-ranking officials, most notably John Bolton, who proposed a scheme of "abandoning nuclear weapons first, compensating afterwards" in the talks with North Korea.

Earlier, North Korea canceled ministerial-level talks with Seoul in a move that was followed by Kim Kye-gwan's announcement that Pyongyang might cancel the Trump-Kim summit if Washington continued its hostile anti-Pyongyang policy.

© AP Photo / White House
Pompeo Vows to Discuss Release of US Detainees in DPRK Ahead of Trump-Kim Summit
The summit was put at risk on May 11 when the United States and South Korea launched a two-week annual air combat regional exercise codenamed "Max Thunder," which was seen by Pyongyang as a threat to its security.

Fresh frictions in US and South Korean diplomatic relations with Pyongyang emerged just weeks after a historic meeting between the leaders of North and South Korea on April 27, when Kim Jong-un and Moon Jae-in signed the Declaration for Peace, Prosperity, and Unification on the Korean Peninsula.

The document stipulates the two Koreas sticking to a nuclear-free peninsula and efforts to formally wrap up the Korean War.