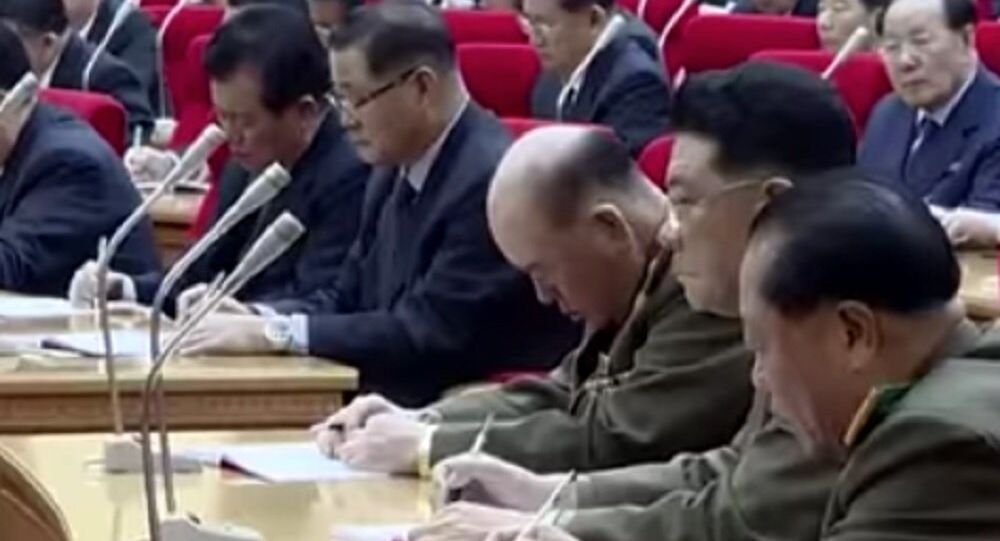 You Snooze, You Lose: Army Chief Naps During Kim's Speech, May Face Execution

The North Korean leader apparently doesn’t fancy seeing his top officials slumping back in their chairs succumbing to an early afternoon doze, but there is one who had the audacity to disobey.

A screenshot has surfaced showing one of Kim Jong Un’s generals nodding off as the North Korean leader addressed the government, announcing his intention to quit the nuclear race.

As seen from the picture now circulating in Korean media, Kim’s army chief Ri Myong-su bowed his head with his eyes closed as he sits in the Supreme People’s Assembly. Another senior member of the assembly apparently caught sight of the napping Myong-su and glanced at him surprisingly, with a slight tinge of disapproval, as the leader was detailing his upcoming meeting with US President Donald Trump.

Again SK media going wild over this still picture of KPA JCoS Chair Ri dozing off. But check the above motion picture and you can clearly see his fingers moving. It's not clear he would nap while being watched by 2 OGD hands: right next to him is Pak TS.https://t.co/OPTRsN526g

Eagle-eyed internet users, who saw the original footage, however, spoke in the military bigwig's defense, saying that although the general’s neck appears limp, his hand hasn’t lost its grip and his fingers are apparently moving.

"Plus he is 84 years old, and afternoon sleep attacks can be overwhelming when you get up there," one Tweeter noted.

A less amusing aspect of this bedtime story is that there have been cases alleged in North Korea where citizens were executed after falling asleep during political meetings under Kim Jong Un.

For instance, North Korea’s vice premier Kim Yong-jin was allegedly shot by a firing squad for reportedly falling asleep during a speech. Before that, Kim presumably had him arrested and charged with corruption. According to other reports, he might have been executed after he proposed a number of policy changes that Kim regarded as destructive for his regime.

On April 21, Kim announced he would scrap nuclear and long-range missile testing as well as shut down the northern Punggye-ri test site, which hosted all six atomic tests. The decision was lauded by Seoul and Washington, both of which will soon be engaged in direct talks with Kim. Japan's Prime Minister Shinzo Abe also praised the move on Saturday, saying it is "a step forward," which he welcomes.