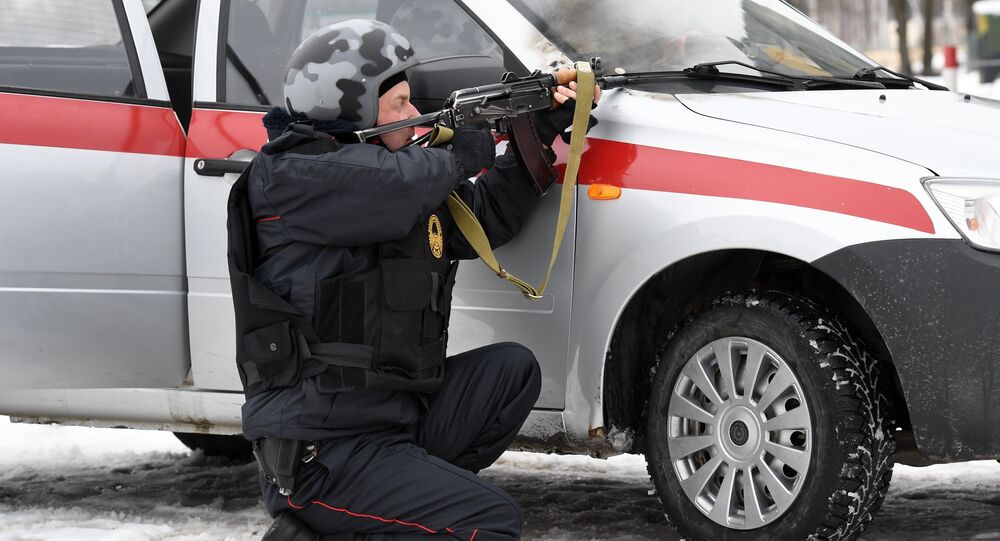 The Russian National Guard (Rosgvardia) and the Chinese People's Armed Police Force (PAP) completed joint military exercises held from December 2 to 13 in China. Speaking to Sputnik, the representatives of the special forces of the two countries shared their impressions on the drills, stressing the importance of Russo-Chinese collaboration.

The anti-terrorist exercises of the special forces of the Russian National Guard (Rosgvardia) and the Chinese People's Armed Police Force (PAP) "Cooperation — 2017" ended on December 13 in the Ningxia Hui Autonomous Region (NHAR) of China.

"The main goal was safety," a representative of the special forces of Rosgvardia and the head of the exercises told Sputnik. "These are international trainings and exercises. It was important that everything went off without injuries."

The Rosgvardia representative explained that the exercises were developed jointly by the Russians and the Chinese. For its part, the PAP provided weapons for the drills.

"This is their weapon, which they use in their daily activities — during training and on combat alert mission. The peculiarity of this weapon is that it is smaller in size. For example, it has an aiming range of 300 meters. We, as a rule, use more serious weapons," said the representative.

During the exercises, the groups worked on military tactics and communication skills. As experience has shown, a week is enough to prepare a unified Russian-Chinese unit.

"The only barrier was a linguistic one," the Rosgvardia representative said, adding that after a week of training the servicemen understood each other at a glance.

In the course of the joint drills, the Russian side demonstrated its advantages in tactical training. At the same time, Russian military personnel value the technical support of their Chinese colleagues.

"The Russian units have had more practice, because they took part in the combat operations against terrorists in the North Caucasus and elsewhere in Russia. As for the technical support, there's much we could learn from the Chinese," Sputnik's interlocutor said, referring to the use of unmanned aerial vehicle (UAV) by the PAP personnel.

© Sputnik / Alexander Vilf
Servicemen of the Russian National Guard during the military parade marking the 72nd anniversary of Victory in the 1941-45 Great Patriotic War on Red Square, Moscow

Wang Chunguang, the head of the Chinese detachment group, also shared his impressions with Sputnik.

"I participated in Russian-Chinese exercises for the first time. I liked it all very much. We became friends with the Russian military. What was the most difficult? I would say that there wasn't anything difficult at all except the language barrier. However, we did not communicate with words, but with special 'methods.' It is clear that our tactics may be somewhat different, but we discussed how we would work together first," Wang elaborated.

© Sputnik / Mikhail Voskresensky
Chinese Forces Near Moscow: China, Russia Commence Security Drills
The Chinese commander agreed that the Russians have a "greater experience." However, the Chinese side has its own experience which helped the parties to mutually improve their skills.

During the drills, the military personnel of the two countries took part in tactical, fire, high-altitude and physical training courses, carried out special training aimed at detecting and eliminating subversive groups. The role of the enemy was played by a unit of Chinese servicemen.

On December 13 a ceremony dedicated to the completion of the exercises was attended by Colonel-General Sergey Melikov, the First Deputy Director of Rosgvardia, and Colonel-General Wang Ning, the Commander-in-Chief of the People's Armed Police of China.

"We will propose to conduct the next anti-terrorist exercises on the territory of the Russian Federation," Col.-Gen. Melikov told reporters at the event. "We do this regularly, since it is necessary to change the situation, the region, the geography, and the task, so that they are more versatile. That's why we will propose [to hold the drills in] the Russian Federation," he noted, adding that the next phase of the joint Russo-Chinese exercises is likely to place in the second half of 2018 — early 2019.

© CC0
RAND Corporation: US May Lose Potential Conflict Against Russia, China
He underscored that one of the objectives of the drills is to strengthen cooperation and mutual understanding between the Russians and the Chinese, opening the door to more friendly and neighborly relations between the two countries.

Melikov pointed out that the two countries are seeking to ensure security during the upcoming 2018 World Cup in Russia and the 2022 Winter Olympic Games in China.

The joint drills of the Russian and Chinese special forces originate in August 2007 when 79 soldiers of the The Snow Leopard Commando Unit of the PAP participated in anti-terrorist exercises "Sodruzhestvo-2007" in the Moscow region.

In June 2013, Beijing hosted a joint tactical and special training "Cooperation-2013" with the participation of 29 servicemen of the Vityaz detachment.

Between July 3 and 15, 2016, the Russo-Chinese tactical and special training "Cooperation-2016" drills took place in the Moscow and Smolensk regions of Russia.