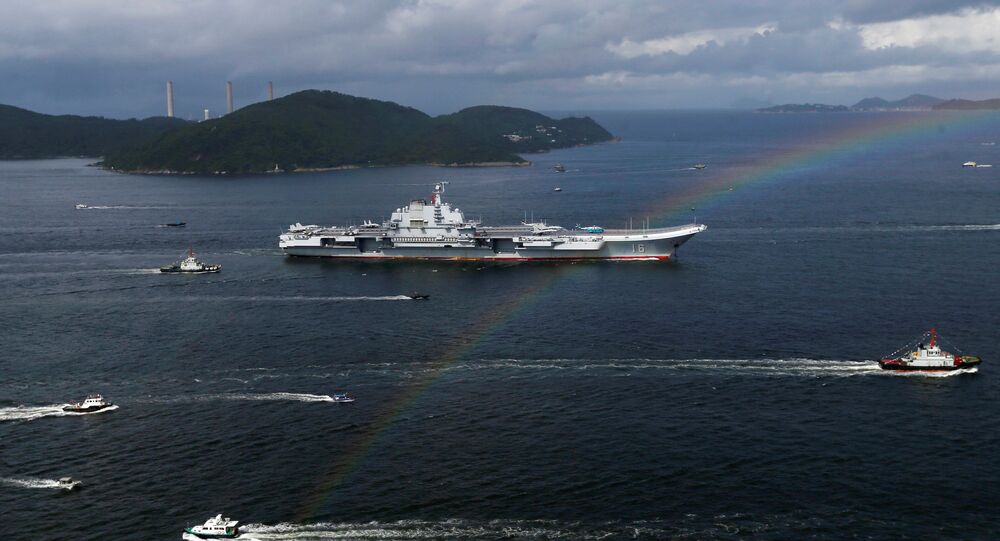 One of China’s top diplomats to the US warned Washington that Beijing would invade Taiwan should the US ever send a Navy ship to the island nation, which China considers to be a wayward province.

Li Kexin, a minister with the Chinese Embassy to the United States, said during an embassy event on Friday that he had told American officials that China would activate their Anti-Secession Law if US naval vessels were sent to the Taiwan Strait.

The law, passed in 2005, denies Taiwan's statehood and outlines Beijing's methods to make the unification of the two Chinas a reality. But the bill also mentions "non-peaceful action" (that being warfare) if China believes that all possibility of a bloodless unification has been lost.

© REUTERS
‘Get Used to It’: China Flies Warplanes, Spy Jets Past Taiwan, Japan

To Li, the deployment of US Navy vessels would signal just such a thing. "The day that a US Navy vessel arrives in Kaohsiung is the day that our People's Liberation Army unifies Taiwan with military force," Li told Chinese media, referring to Taiwan's largest port.

His words were echoed in an editorial that ran in a Chinese newspaper, the Global Times, owned by the Chinese Communist Party and often used to informally express the views of Beijing. "The Chinese mainland has never given up the option of Taiwan reunification by force, which is clear to people across the Taiwan Strait," the editorial read.

"Li's words have sent a warning to Taiwan and drew a clear red line. If Taiwan attempts to hold an independence referendum or other activities in pursuit of de jure 'Taiwan independence,' the PLA will undoubtedly take action."

The Taiwanese Foreign Ministry slammed Li's words on Saturday, accusing China of using threats and coercion when they claim to desire peaceful reconciliation. "These methods show a lack of knowledge about the real meaning of the democratic system and how a democratic society works," the ministry wrote in a statement.

The Democratic Progressive Party (DPP) that currently controls the presidency and unicameral legislature of Taiwan is one such party that supports de jure Taiwanese independence.

Taiwanese President Tsai Ing-wen has made her support for something like an independence referendum ambiguous. She claims that her ideal is to maintain peace with China and the security of Taiwan, but she also has refused to affirm the 1992 consensus — a semi-official agreement between the two Chinas that there was only one undivided China, although unsurprisingly neither side could agree which China was the real one.

Tsai's refusal has led to a significant degradation of cross-Strait relations since she took office in 2016. In July, China entered Taipei's air defense identification zone with their sole aircraft carrier, the Liaoning. Later that month, Beijing buzzed Taiwanese airspace with fighter jets.

The administration of US President Donald Trump has seen a strengthening of ties between the US and Taiwan, often a sticking point in Washington-Beijing relations. Trump was the first president since Jimmy Carter to directly speak with the Taiwanese president, and in September the US Congress passed the 2018 National Defense Authorization Act which authorized naval cooperation between the US and Taiwanese militaries.

In 1958 and 1996, the US deployed naval vessels to the Taiwan Strait to defend the island during periods of sky-high tensions between Beijing and Taipei. Neither incident ended in World War III.