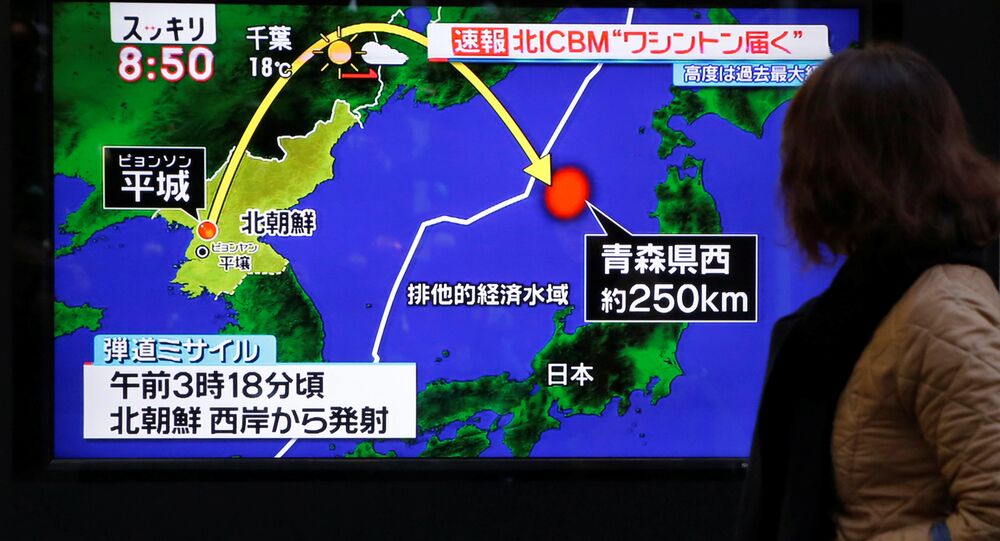 Despite growing threats from North Korea’s expanding nuclear and missile capabilities, it is not necessary for Japan to acquire its own nuclear capabilities, since the nation is not Pyongyang's primary target, experts told Sputnik.

MOSCOW (Sputnik), Tommy Yang — When North Korea successfully tested its latest intercontinental ballistic missile (ICBM), known as the Hwasong-15, last week, the missile traveled for 53 minutes and covered a distance of 950 kilometers (590 miles), reaching a maximum altitude of 4,475 kilometers (2,780 miles) before landing in a target area in the Sea of Japan. Security experts said North Korea’s new ICBM could have a range of more than 13,000 kilometers (8,100 miles), capable of reaching any part of the US mainland.

During previous missile tests conducted by North Korea this year, a number of missiles fell into the Sea of Japan with some even flying over Japanese airspace. Faced with growing threats from North Korea’s nuclear arms program, hawkish security experts in Japan have started to advocate the nation to improve its missile defensive capabilities, with some going as far as to suggest that the country acquire nuclear weapons through the deployment of US tactical weapons or developing its independent nuclear weapons program.

However, other Japanese scholars argued that it was not necessary for the nation to acquire nuclear capabilities, because the country was not the main target for North Korea’s missiles.

"This [nuclear crisis] is not about defense of Japan fundamentally. It is about the defense of South Korea. If North Korea attacks, they [South Korea] are the target, as the two Koreas have been competing for a long time. The target for North Korea is fundamentally South Korea. We’re not super concerned, because, ultimately, this is about the defense of South Korea. That’s why it’s not really necessary for us to think about acquiring nuclear weapons because of [threats from] North Korea," Narushige Michishita, a security policy studies professor at the National Graduate Institute for Policy Studies in Tokyo, told Sputnik.

The Tokyo-based expert explained that South Korea’s close proximity to North Korea also forces it to set a different priority from Japan.

"Japan is far away from North Korea. Defense oriented approach makes sense for us. South Korea is very close to North Korea. They tend to put emphasis on offense [capabilities]," Michishita said.

The Japanese expert further noted the strategic alliance between Japan, South Korea and the United States.

No US Nukes in Japan

© AP Photo / Eugene Hoshiko
North Korea Threatens Japan With 'Nuclear Clouds' in Response to Pressure
As South Korea weighs the option of reintroducing US tactical nuclear weapons to the country as additional military deterrence against North Korea, Japan does not need to follow suit because the presence of such weapons in Japan could have adverse effects, Michishita suggested.

"We don’t have to deploy them [tactical nuclear weapons] in Japan. There will be a huge outcry, because Japanese people have a strong anti-nuclear sentiment. This could even undermine the health of US-Japan Alliance, rather than strengthening it. That would be a stupid idea," he said.

The significant improvement of conventional weapon systems in recent years make them almost as efficient as nuclear weapons, experts suggested.

"In comparison with 20 years ago, conventional capabilities today, such as Tomahawk [missiles], joint direct attach munition and precision-guided munition, can do a lot of things. They’re as effective as nuclear weapons," Noboru Yamaguchi, a professor of international relations at the International University of Japan in Niigata and retired lieutenant general in Japan’s army, known as the Ground Self-Defense Force, told Sputnik.

To defend itself against increasing threats of North Korea’s missiles, Japan has continued to improve its missile defense systems by procuring advanced US weaponry.

© Sputnik / Iliya Pitalev
Japan: North Korea Having Capabilities to Prove Status of Nuclear State
According to professor Yamaguchi from the International University of Japan, the nation has been equipped with both the sea-based Aegis ballistic missile defense system and Patriot surface-to-air missile system.

"The two Aegis systems in the Sea of Japan can already cover the whole territory of the country. In comparison, Patriot has a very small footprint. But any kind of missile defense system is not perfect. There may be some leakage. It’s still much better than having nothing. Japan has come a long way in the right direction," he said.

The Niigata-based expert pointed out that cost could be an obstacle for Japan to acquire additional offensive capabilities, such as long-range cruise missiles.

Japan has been preparing to acquire precision air-launched missiles that would give it the capability to strike North Korean missile sites for the first time, according to media reports this week. During his first visit to Japan in early November, US President Donald Trump encouraged Japanese Prime Minister Shinzo Abe to "purchase a lot of military equipment" from the United States.

Trump: China Must Use all Available Levers on N Korea to Curb Nuclear Program