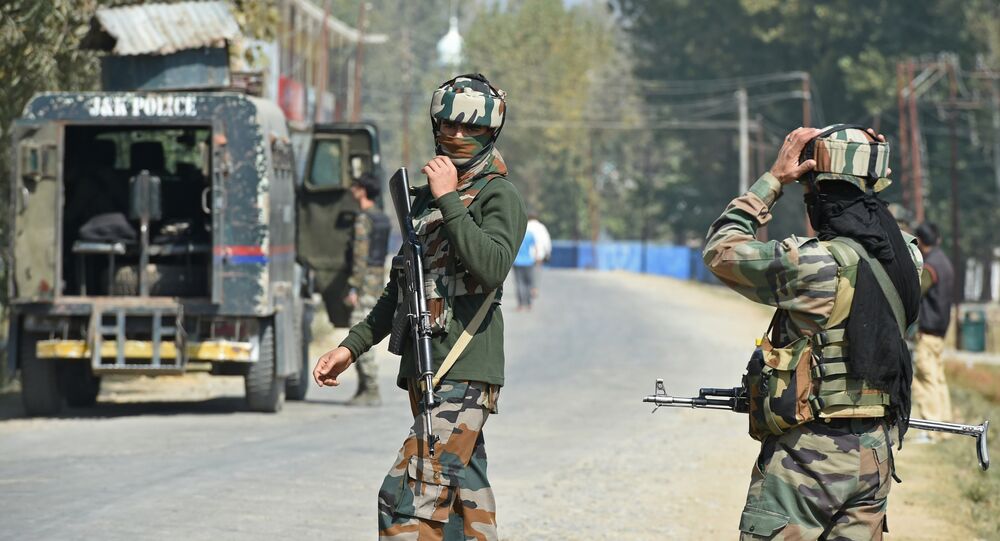 The Indian Air Force commandoes were working with the Indian Army and the Jammu and Kashmir police for operational experience and training.

New Delhi (Sputnik) – India has lost two commandos of its air force in an early morning encounter with the Lashkar-e-Taiba terrorists in Bandipora of north Kashmir.

According to defense officials, four other security personnel sustained serious injuries in the gun battle which ensued after 13 Rashtriya Rifles of Indian Army and special operations group (SOG) of Jammu & Kashmir police launched a cordon-and-search operation at Rakh-e- Hajin village following inputs about the presence of some Lashkar-e-Toiba (LeT) terrorists. During the search operation, the terrorists who were hiding in a house opened fire leading to a bloody gun battle. The deceased commandos have been identified as Neelesh Nayan and Milind Khabar.

© AP Photo / Channi Anand
Indian Forces Kill 5 Militants Attempting to Cross Border in Kashmir Region
In the encounter, two terrorists were also gunned down by the Indian security personnel. The terrorists have been identified as Abu Bakr and Nasrullah Mir.

According to the intelligence report, more than two dozen terrorists are reportedly active in Bandipora district alone among a total of more than 150 in the four districts of Kashmir.

Meanwhile, all educational institutions of the area have been closed citing security threat to students. Internet services have also been snapped until further orders by the authorities.

This year so far, India has lost 63 security personnel in terrorist violence in Kashmir in comparison to 88 last year. Security forces have also successfully eliminated 170 terrorists till date this year in comparison to 165 in 2016. “Everyday 5-6 terrorists are being neutralized in Jammu and Kashmir due to the sustained efforts of the Army, paramilitary forces, and other security agencies. I compliment them,” Rajnath Singh, India’s Minister of Home Affairs had said earlier this week.