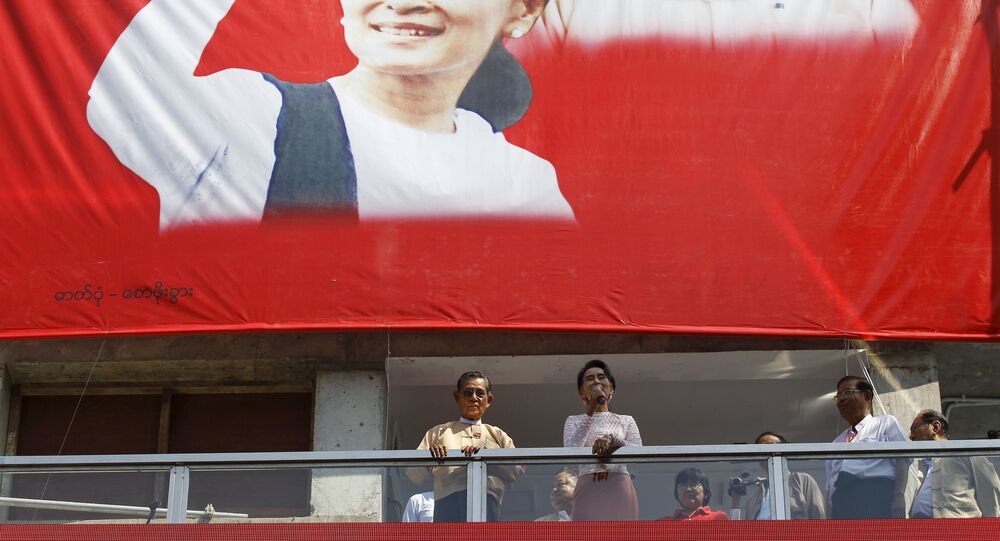 As the recent escalation of violence in Myanmar has resulted in thousands of Rohingya Muslims fleeing to Bangladesh, hundreds have been killed by the country’s military. Peace activists have launched a petition to revoke the Nobel Peace Prize from the "de facto ruler" Aung San Suu Kyi, as she "has done virtually nothing" to stop the violence.

The protracted battle between Myanmar's military and Rohingya Muslims has not only resulted in the deaths of thousands of civilians and security personnel, but has also unleashed a refugee crisis in the region with thousands of Rohingyas fleeing Myanmar and taking refuge in neighboring India and Bangladesh.

Peace activists have launched a campaign demanding the Nobel Peace Prize Committee revoke its 1991 prize awarded to Aung San Suu Kyi. They have launched a petition on change.org urging the Nobel Peace Prize Committee to take back the peace prize from Aung San Suu Kyi over her alleged complicity in what is seen as the ethnic cleansing of Rohingya Muslims in the country.

The petition has already been signed by 366,000 supporters.

“When a laureate cannot maintain peace, then for the sake of peace itself the prize needs to be returned or confiscated by the Nobel Peace Prize Committee,” the petition reads.

© REUTERS / Simon Lewis
'Huge Iceberg of Misinformation': Myanmar's Suu Kyi Slams 'Fake News' About Rohingya Crisis
“Therefore, we hereby demand the chair of the Nobel Peace Prize Committee confiscate or take back the Nobel Peace Prize awarded to Aung San Suu Kyi. Only those who are serious in maintaining  world peace may be awarded such a coveted prize,” it stated.

The campaign further stressed that she has “virtually done nothing” to stop the crimes against the Rohingya Muslims.

Amid this mounting international pressure on Suu Kyi to act on the continuing clashes between Myanmar's military and Rohingya militants in Rakhine State, she was quoted as describing the "global outrage over Myanmar's treatment of its Rohingya Muslims" as "a huge iceberg of misinformation."

Meanwhile, the United Nations Human Rights Commission (UNHRC) has reiterated its support to Rohingya refugees. The UNHRC has said it "supports them [the Rohingyas] to the extent possible through governmental, non-governmental organizations and other partners. The UNHCR works closely with the governments to ensure refugees are able to live a life of dignity in the asylum," the UNHRC told Sputnik via email.

The United Nations World Food Program reported that an estimated 146,000 Rohingya have arrived in Bangladesh since violence broke out in Myanmar’s northern Rakhine State in late August.

© AP Photo / Petr David Josek
Iranian Foreign Minister Urges UN to Stop Violence Against Rohingya Muslims in Myanmar
On August 25, Muslim insurgents attacked security posts in Rakhine State. The attacks prompted a response from Myanmar’s authorities, resulting in clashes and the death of hundreds of Rohingya, forcing thousands to flee; the situation has been harshly criticized by the global community.

Rakhine State is a site of frequent clashes between Myanmar's Muslims and Buddhists. Official authorities and the Buddhist population consider the Rohingya to be illegal immigrants from Bangladesh.

The conflict that started about a century ago has gradually escalated since 2011 before peaking in 2012, when thousands of Muslim families sought asylum in special refugee camps on the country's territory, or fled to Bangladesh. Yet another escalation started in 2016.