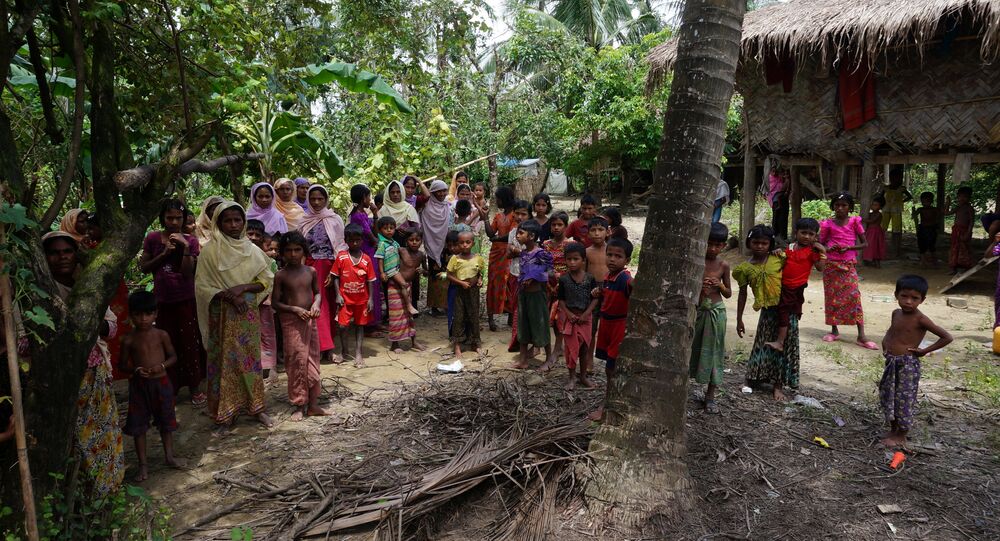 Aung San Suu Kyi said on Wednesday that global outrage over the government’s treatment of the local Rohingya Muslims was being fueled by "a huge iceberg of misinformation.”

Her statement followed the United Nations’ call for an end to the government’s crackdown on Rohingya Muslims, which has already forced about 146,000 people to flee to neighboring Bangladesh.

© AP Photo / Esther Htusan
The Rohingya Crisis: Reality, Rumors and Ramifications
The conflict between Myanmar’s Buddhists and Rohingya Muslims, widely dismissed in Myanmar as illegal immigrants from Bangladesh, erupted in Rakhine state in late August prompting a wave of protests across the world over what has been dubbed the disproportionate use of force by the government.

Rohingya Muslims have already fled from violence in Myanmar after insurgent attacks on August 25 sparked clashes with security forces and provoked a military counter-offensive, a UN source said on Wednesday.

This brings the total number of Rohingyas who have sought refuge in Bangladesh since October 2016 to 233,000, when Rohingya insurgents staged similar, but smaller attacks on security posts.

Despite repeated attempts to assimilate in Myanmar, the Rohingyas, who comprise approximately 1.6 percent of the country's population, are not being recognized as citizens.

The Rohingyas remain deprived of all civil rights, including the right to receive medical care and education in Myanmar.

Muslim-inhabited territories in the northern part of Rakhine state have turned into a foothold of religious extremists who have championed secession from Burma (Myanmar), joining East Pakistan (Bangladesh) since 1947.

© REUTERS / Cathal McNaughton
UN Refugee Agency Calls on Myanmar’s Neighbors to Ensure Rights of Rohingya Refugees
In the 1990s and 2000s, Rohingya extremists continued their rapprochement with al-Qaeda, which trained mujahedeen from Myanmar at their hidden bases in Afghanistan.

In the early 2010s, the Arakan Liberation Army, a Rakhine insurgent group founded in 1968, intensified its military activities in the region. They are reportedly supported by private donors from Saudi Arabia and Pakistan.