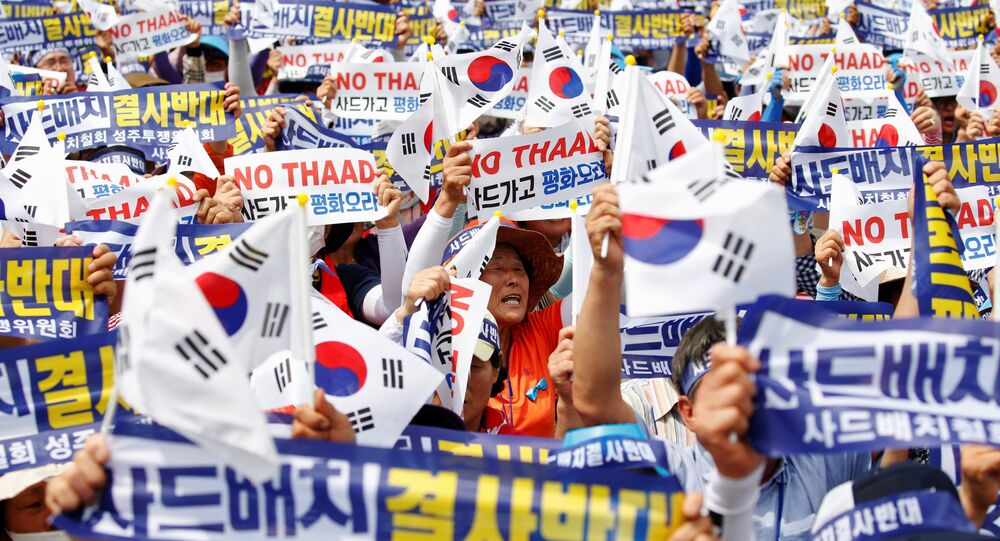 The locals from the Seongju County of South Korea, where THAAD launchers are planned to be deployed, protest against the decision, blocking the road to the missile system's battery site.

MOSCOW (Sputnik) — Activists and protesters against the deployment of US Terminal High Altitude Area Defense (THAAD) missile launchers in Seongju County in North Gyeongsang Province, are demanding suspension of the supplies of additional equipment in the area, local media reported Wednesday.

Earlier in the day, Seoul announced the deployment of four THAAD launchers in Seongju. On Tuesday, Seoul Administrative Court has dismissed the claim of Seongju residents to suspend the government's decision to allocate land for the THAAD missile system.

"Four additional THAAD launchers will be brought into Seongju early tomorrow (Thursday) morning. We ask all of you to gather here by 6 p.m.," a protesters’ group said in a text message to local residents and activists, as quoted by the Korea Herald newspaper.

A group of people blocked the road to the THAAD battery site in Seongju, North Gyeongsang Province, on Wednesday afternoon, the newspaper reported.

The government said Tuesday that it would mobilize at least 8,000 policemen in order to prevent any clashes at the site. In April, the two launchers were brought into Seongju in the dark and unannounced. At that time, some 1,300 policemen were dispatched to secure the operation.

This protest is one in a row among other rallies against THAAD deployment in South Korea. In August, about 900 people from the county shaved their heads to protest the government's decision.

© REUTERS / Kim Jun-beom
More than 900 Seongju residents have their heads shaved during a protest against the planned deployment of the US Terminal High Altitude Area Defense (THAAD) system at a local park in the southeastern town of Seongju on August 15, 2016

On July 28, North Korea conducted its second intercontinental ballistic missile (ICBM) test in a month. South Korean President Moon Jae-in stated that in response, South Korea would install additional THAAD launchers at a US military base in South Korea.

Moscow has repeatedly opposed the THAAD deployment, as it could further deteriorate the nuclear crisis and provoke North Korean aggression. Russia, alongside China, also criticized the increase in South Korea's joint military activities with Washington as a danger to peace and stability in the region. Currently, two THAAD launchers and a radar are deployed in South Korea.