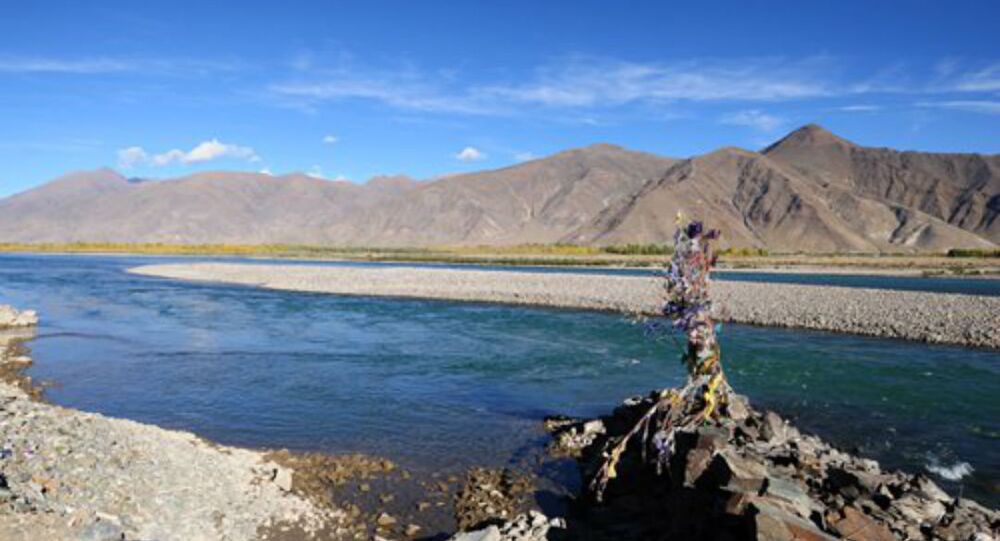 Experts want the government to reconsider diverting water from Tibet to parched northern regions, but disagreements remain strong due to the huge cost and possible environmental damage.

Around 20 scholars met outside Urumqi in Northwest China's Xinjiang Uyghur Autonomous Region over the last weekend of July, and discussed the feasibility of diverting water from the heights of the Qinghai-Tibet Plateau to Xinjiang's lowland plains, one of the attendees revealed.

"Water from rivers such as the Yarlung Zangbo River can help turn the vast deserts and arid lands into oasis and farmlands, alleviate population pressure in the east, as well as reduce flood risks in the counties through which the river travels downstream," Ren Qunluo, professor at the Xinjiang University of Finance and Economics, told the Global Times.

"Xinjiang has 1.1 million square kilometers of plains, equal in size to all the plains in the country's east. But less than 70,000 square kilometers are arable due to a shortage of water," he noted. "If all these plains are greened, another China will have been created."

The dream of massive water diversions from soaking-wet Southwest China to the thirsty north has been on the minds of engineers and scholars for decades.

But some say this dream could be a nightmare of environmental damage, and these concerns mean the plateau-to-plain project has never been approved.

However pro-diversion experts are now trying to rally support for the idea.

He Xinglin, a construction engineer and investment consultant who has long supported diverting water from the Tibet Autonomous Region to Xinjiang and the Inner Mongolia Autonomous Region, says that social conditions are not yet ripe as the public may not accept this plan.

However, he noted that "if approved, the project, combined with the Belt & Road initiative, will become a major engine to pull China and the world out of economic difficulties."

To some experts these dreams are rather fanciful.

Mei Xinyu, an associate researcher at the Chinese Academy of International Trade and Economic Cooperation, told the Global Times that he has recently tried to persuade friends visiting from Xinjiang to abandon any idea of "transforming nature."

"The project will likely bring calamity to the country. I firmly oppose it," Mei told the Global Times. "The construction of the Grand Canal connecting Beijing in the north and Zhejiang Province in the south led to the downfall of the Sui Dynasty (581-618). We should learn their lesson."

Geng Changsheng from Shiyan, Central China's Hubei Province, started to study water diversion and publish his ideas online in 2014. According to his proposed plan, a 1,400-kilometer long tunnel would be built connecting the Southwest's Pengqu, Yarlung Zangbo and Lhasa rivers to Northwest China's Taklimakan Desert, which covers over 330,000 square kilometers.

The plan has drawn lots of support, including from Ren. But Geng admits the whole project would cost an estimated 1.1 trillion yuan ($163.69 billion) and take at least 20 years to finish.

Mei says that Xinjiang cannot afford this project. "The region's GDP last year was only 900 billion yuan. But its expenditure was almost five times its income. It depends massively on central government subsidies and the assistance of local governments in other parts of China," Mei explained.

Ren thinks that these worries are overblown. "China is facing industrial overcapacity. The project will help stimulate the economy. Besides, the yearly cost would be small compared to the country's total revenue," he explained.

Geng argued that financing can also be raised through sponsorships and the sale of leases on future arable land.

But these economic reassurances do little to relax those whose concerns are environmental. Liu Shukun, a professor at the China Institute of Water Resources and Hydropower Research says he doesn't support the proposed project as it could "possibly lead to changes to the ecology in both Tibet and Xinjiang."

"We now advocate an 'ecological civilization.' Human beings, wildlife and the greater environment are all equal. We shouldn't seek to satisfy our own interests at the cost of ecological destruction," he noted.

Geng argues that humans have always transformed nature and Ren claims that the greening of the desert will increase biodiversity.

The idea of sending Tibetan water to Xinjiang dates back to the late 1950s. March into the Desert, a famous work by meteorologist, geologist and educator Zhu Kezhen (1890-1974) that has long featured in Chinese schoolbooks, advises diverting water to Xinjiang's arid plains.

The plan to divert water from Tibet to northern parts of China, known as the Grand Western Water Diversion Plan, was heatedly discussed in the 1990s. Over the decade, 208 lawmakers and 118 political advisers raised proposals and motions on the plan, according to a 2006 report by the Southern Weekly.

Guo Kai, a self-taught hydrologist, is one of many experts who have spoken in favor of the project. "So much of the water of the Yarlung Zangbo runs out of China, it's a huge waste," said Guo, who has been pushing his own design for the project since the 1980s.

His proposal to divert 200 billion cubic meters of water every year and send it to North and Northwest China through tunnels and pipelines has received wide support from military officers, including 118 major generals or above.

In 1999, with the support of central leaders, a team of scholars specializing water resources, climate, geology and civil engineering, including Guo, launched a 36-day investigation trip to the related area and came up with a positive report.

However, it faced a backlash from many other experts and officials, including Wang Sucheng, the then minister of the Ministry of Water Resources, who told the media the plan was unnecessary, unscientific and unfeasible.

Wang Hao, an academician at the Chinese Academy of Engineering, and Xu Daoyi from the China Earthquake Administration, also opposed building high dams and tunnels in lofty mountains vulnerable to natural disasters.

Opposition has also come from other countries. The Indian Minister of State for Environment and Forests Jairam Ramesh said in 2010 that New Delhi would not accept any plan to divert the Yarlung Zangbo, according to The Hindu newspaper. The river runs through China, India and Bangladesh and is also known as the Brahmaputra.

China's decision-makers have left the plan stranded. However, discussions can still be found regularly.

Wang Guangqian, a hydrologist and academician at the Chinese Academy of Sciences, proposes building canals and pipelines along the Qinghai-Tibet railway to divert water from the Yarlung Zangbo.

"[We] thought this wouldn't happen for 50 years but it is necessary now," Wang was quoted as saying by the First Financial Daily in 2011, citing China's growing demand for water, increasing desertification and shrinking groundwater reserves in North China.

Geng believes the route his diversions would take dodge the "earthquake belt."

If a huge amount of water is diverted to Xinjiang and much of the region is turned into arable land, it could be a driver of precipitation in other northern parts of China, helping to dampen these dry regions, he said. Moreover, all the extra plant life that will grow will help fight global warming, he added.

Ren recently set up a WeChat group to gather pro-diversion netizens together. They exchange ideas and suggestions on how to improve the plan and how it can be realized.

Significance and side effects

Chen Chuanyou, a water resource expert at the Chinese Academy of Sciences, believes diverting water from Tibet to the north will help guarantee the realization of the "Chinese dream."

"It's needed to prepare for drought. Though it seems that we don't lack water now, we need to nip shortages in the bud," Chen told the Global Times, citing that 10 massive droughts happened in North China from the Ming Dynasty (1368-1644) to the Republic of China (1912-1949) period, claiming tens of thousands of lives each time.

However, he doesn't think it is feasible to transform deserts that have existed for millions of years into farmland or forest. "The project would be too huge and the outcome is unpredictable."

He proposes building tunnels and pipelines to connect rives such as the Yarlung Zangbo and the Nujiang to the Yangtze River, which would then allow the flow of water north through the middle route of the South to North Water Diversion Project.

As for the reaction of downriver countries, both Chen and Ren believe their worries can be solved through diplomacy. "The areas the Yarlung Zangbo runs into are rich in rainfall. We could only divert water in the rainy season. The project can help control floods in those countries," Ren said.

In addition, experts say the impact of diverting water from the river's upper reaches will be small. According to the Chinese Academy of Sciences, the natural surface runoff of the Yarlung Zangbo is 828 billion cubic meters per year, of which only 14.61 percent is produced in China.

Geng believes that diverting water to Xinjiang will help attract people to move there from densely-populated and poverty-stricken areas, which will promote stability.

However, Mei says that the huge cost of the project may increase the tax burden on citizens in coastal areas and cause public anger, which will trigger social instability.

Whatever the future benefits or pitfalls of the project, some people are already using it to make money flow into their pockets.

In 2015, the Xinjiang-based Korla Evening Post reported police had busted several cases in which crooks faked documents and seals in the name of a State-funded water diversion project and cheated hundreds of people across the country who wanted to get involved.

ASEAN Summit: How China Diplomatically Outflanked the US in Manila

Death Toll in Powerful Earthquake in China Rises to 19