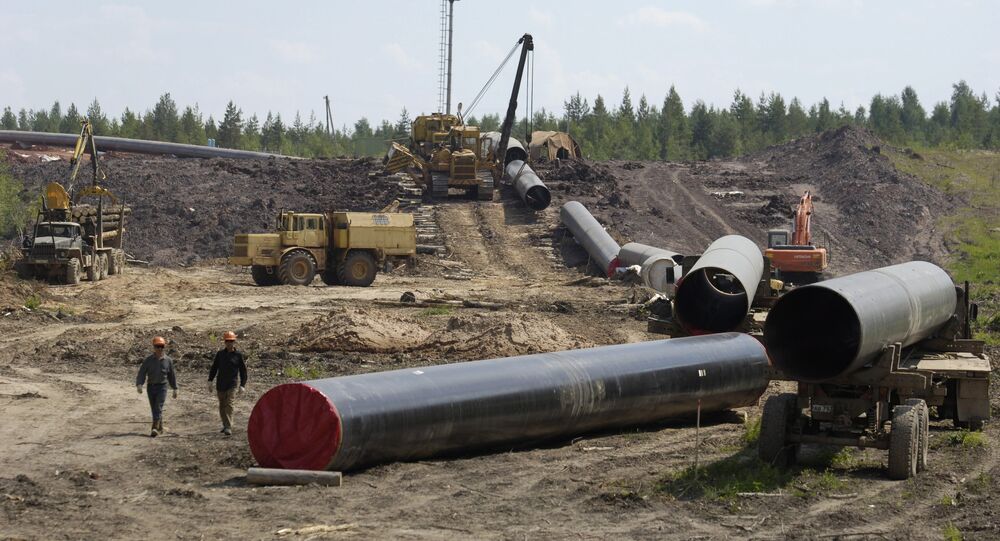 A project to import Russian gas to South Korea via North Korea could be a valuable economic and political tool that fosters more economic cooperation between the two Koreas.

© REUTERS / KCNA
The ‘Gift’ That Keeps on Giving: North Korea Hints at More Missile Launches
On Thursday, South Korean President Moon Jae-in, who took office in May, addressed the Korber Foundation in Berlin. He talked about the path towards a peaceful Korean peninsula, and stressed that greater economic cooperation with North Korea is an important foundation to the establishment of peace there.

Jae-in, who is affiliated to the South Korean Democratic Party, said that he has planned a "new economic map for the Korean Peninsula," which will be put into action if there is progress on the North Korean nuclear issue.

The plan includes a fresh connection between the South and the North across the military demarcation line, an "economic belt" which would "establish an economic community where the two Koreas prosper together," the Korea Herald reported Jae-in as saying.

"The severed inter-Korean railway will be connected again. A train departing from Busan and Mokpo will run through Pyongyang and Beijing, and head towards Russia and Europe. Cooperation projects in Northeast Asia, such as the gas pipeline project connecting the two Koreas and Russia, may also be implemented."

"South and North Korea will prosper together as a bridging country connecting the Asian mainland and the Pacific. The South and the North need only to implement the Oct. 4 Declaration together. Then the world will see a new economic model of an economy of peace and co-prosperity," the South Korean President said.

Back in 2008, Moscow and Seoul reached a preliminary agreement on the delivery of Russian gas and negotiations with North Korea about transit began in 2011, when Russia's Gazprom and South Korea's Kogas signed a roadmap for the project's construction.

The proposed pipeline is planned to be at least 1,100km in length, at least 700km of which would pass through North Korean territory. According to Gazprom, it would have a capacity of at least 10 billion cubic meters per year.

© REUTERS / Nord Stream 2
Gas War: Germany Takes on EU, US for Nord Stream 2 Pipeline Project
The project appears to be a win-win for all concerned: Russia would gain a new export market, North Korea would benefit financially as a transit country and South Korea would receive a stable and more economical supply of gas.

"Korea buys liquefied natural gas. All Asian countries are interested in gas pipelines, because it is always cheaper. That is why Japan also periodically returns to the idea of a gas pipeline," Simonov told the Russian newspaper Vzglyad.

Simonov said that the prospects for the project are dependent on inter-Korean relations.

"When (the late, former South Korean President) Roh Moo-hyun was in office, he promoted the 'Sunshine Policy,' that is, involving North Korea in joint projects and thereby changing the country in a peaceful way. During his term in office, projects to build the gas pipeline and to build a railway through North Korea which would carry cargo across the Trans-Siberian Railway were approved. The previous South Korean President promoted a completely different policy: that talking to North Korea is pointless, they are outlaws, enemies, there is no sunshine and we will increase our defense. But since a supporter of rapprochement with North Korea has again won the election, the project to build a gas pipeline from Russia has been revived."

Despite that, traditional objections to the project have also been raised, Simonov said.

"Opponents have named the traditional arguments against the gas pipeline: that South Korea will become dependent on this pipeline and that North Korea will blackmail, manipulate and may even block the transit. However, it should be noted that South Korea has LNG terminals, so if the gas pipeline is disconnected, it won't not be cut off from energy resources. When the country has another source of gas, there is no sense in turning off the pipe."

© Sputnik / Grigoriy Sisoev
'A New Level' of Cooperation: What's Behind Gazprom Leaving Turkey's Gas Market
Simonov said that one of the sticking points of the project is disagreement between Gazprom and Kogas over who bears responsibility for the transit across North Korea and therefore who bears the risk. This time round, the same issue is likely to arise.

"When Gazprom was holding negotiations about the gas pipeline last time, the main question was, where will the point of delivery of Russian gas be? Gazprom said that it was ready to invest in the construction of the pipeline, but that the gas would be sent to the border of Russia and North Korea and the transit risks would be South Korea's. But South Korea wanted to get the gas delivered to the border between the two Koreas and for Gazprom to carry the transit risks. That was the end of the conversation," Simonov said.

While the future of the pipeline project is still unclear, Gazprom and Kogas have signed several energy agreements to import more Russian LNG from the Sakhalin-2 project, which currently provides 1.5 million tons of LNG per year to South Korea.

Most recently, in December the parties signed a deal to increase cooperation including joint projects in LNG production, transportation and regasification and in gas-fired power generation.

How the US Maneuvered Itself Into the North Korean Trap

US, S. Korea, Japan to Press for Early Adoption of New Sanctions on Pyongyang