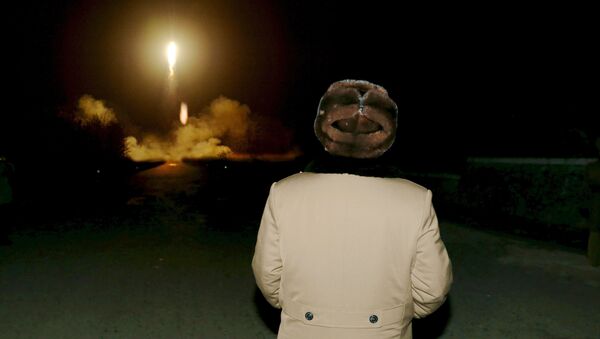 The isolated nation mockingly referred to the the Hwasong-14 launch as a "gift package" for the US’ Independence Day, as it took place on July 4, seemingly to reiterate its stance that the nuclear program is designed to fend off aggression from Washington.

State-owned Korean Central News Agency (KCNA) published a statement from an unnamed Foreign Ministry spokesperson saying, "The US will receive more 'gift packages' of different sizes from the [Democratic People’s Republic of Korea] in endless succession, as it tries harder to destroy, by means of sanctions and pressure, the overall national power and strategic position of the DPRK," according to Yonhap News Agency.

The statement also seemed to hint that South Korea won’t be included in denuclearization talks after liberal President Moon Jae-in said he was willing to engage the North in discussion on a possible peace treaty, their nuclear program and other issues while he was visiting Berlin ahead of the G20 summit there.

Deutsche Welle reports that Moon described the launch as a "great threat and provocation," and called for deeper sanctions while meeting with German Chancellor Angela Merkel.

On Friday, Japan and the US joined South Korea in calling for a UN Security Council resolution applying for new sanctions against the North. Japanese Prime Minister Shinzo Abe vowed to apply "maximum pressure" to address Pyongyang’s nuclear program.

The North’s statement asserted that, "The issue of the DPRK's nukes and ballistic rocket is an issue confined to the DPRK and the US."

Some experts say that the trajectory of Tuesday’s launch could put Alaska and possibly the Pacific Northwest within North Korea’s strike range, as Pyongyang claims that the newly developed missile can carry a large nuclear warhead and is capable of striking the US mainland.

Soon afterward, South Korean and US forces conducted missile drills, riling the North, which condemned Seoul as "puppet military gangsters," saying it would be a "piece of cake" to destroy them.

North Korea also declared in the statement that until the US abandons its aggressive stance towards Pyongyang, discussions of reeling in its missile and nuclear programs won’t be possible.

"The DPRK will neither put its nukes and ballistic missiles on the negotiating table in any case nor flinch even an inch from the road of bolstering its nuclear force unless the hostile policy and nuclear threat of the US against the DPRK are thoroughly eradicated," its statement read.