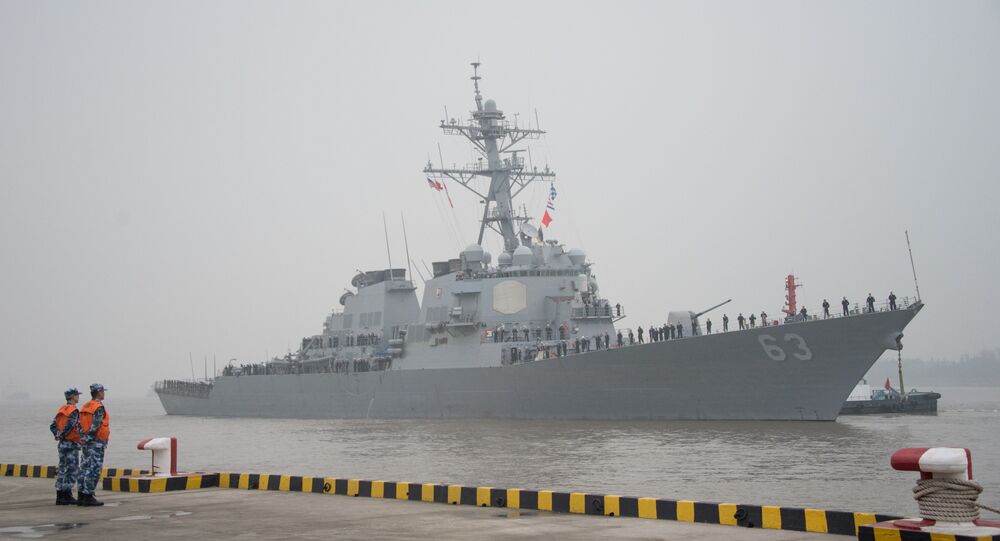 The Chinese Foreign Ministry voiced protest over US destroyer Stethem sailing close to disputed islands in the South China Sea.

In its turn, Beijing "dispatched military vessels and fighter planes in response to warn off the US vessel."

The Chinese ministry described the US aircraft carrier's "entry into the territorial sea of China" as a "provocation."

"Under the pretext of "navigation freedom", the US side once again sent a military vessel into China's territorial waters off the Xisha Islands without China's approval. Its behavior has violated the Chinese law and relevant international law, infringed upon China's sovereignty, disrupted peace, security and order of the relevant waters and put in jeopardy the facilities and personnel on the Chinese islands, and thus constitutes a serious political and military provocation. The Chinese side is dissatisfied with and opposed to the relevant behavior of the US side."

The Chinese Foreign Ministry urged the US to "immediately stop such kind of provocative operations that violate China's sovereignty and threaten China's security," adding that Beijing will continue to take measures to defend its national sovereignty.

© REUTERS / U.S. Navy/Handout
US Destroyer Sailing in S China Sea Unlikely to Be the Last Episode in Washington-Beijing Standoff
Beijing cited the Law of the People's Republic of China on the Territorial Sea and the Contiguous Zone, which proclaimed the baseline of the Xinsha Islands 21 years ago. "The relevant Chinese law has explicit provisions on foreign military vessels' entry into the territorial sea of China," it added.

The South China Sea area, where Xisha/Paracel Islands are located, is a disputed region claimed by Brunei, China, Malaysia, Taiwan, the Philippines and Vietnam, as it is believed that it has vast energy resources. Chinese authorities claim 90 percent of the area and have repeatedly said that the country's activities in the region are China's sovereign right.

© Wikipedia
Chinese Fighter Jets Intercept US Navy Aircraft Over S China Sea - Reports
Earlier, Japan and Australia reiterated their calls for the US to stick with its longstanding policy of conducting freedom-of-navigation operations in the region.

Also in May, Chinese fighter jets reportedly came within 100 feet of US anti-submarine and maritime surveillance P-3 Orion aircraft over the South China Sea.