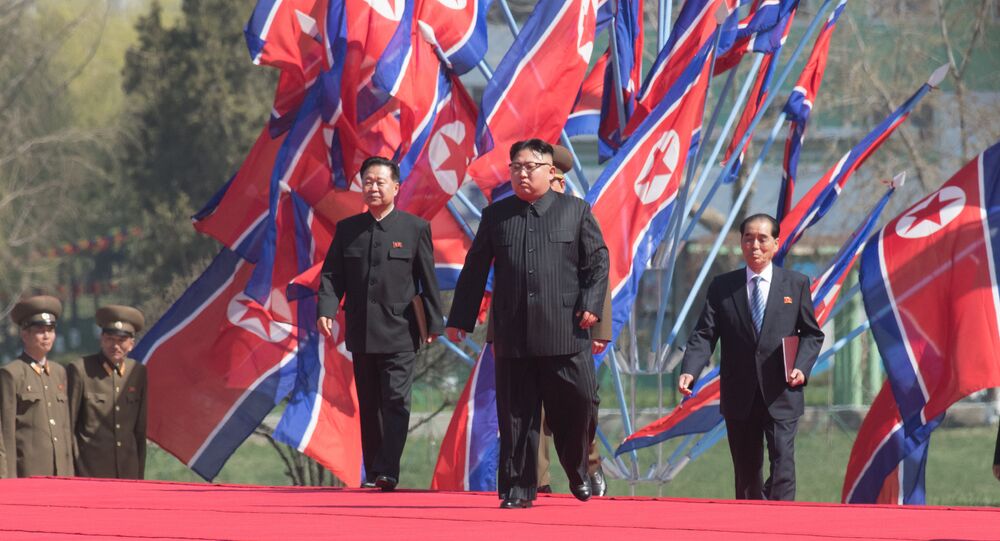 A terror group which allegedly was setting up an assassination attempt on Kim Jong-un, Chairman of the Workers' Party of Korea, has been exposed in North Korea, North Korean Ambassador to Russia Kim Hyun Joong said on Friday.

The terror group was acting on the instruction of intelligence agencies of the US and South Korea, according to Kim Hyun Joong.

"[North Korea] has exposed a criminal group planted by the CIA and the South Korean intelligence service to carry out state-backed terror [plot] by the means of biological and chemical weapons against our leadership," the ambassador said during a press conference in Moscow on Friday.

© AP Photo / U.S. Force Korea
Situation on Korean Peninsula Reaches 'Explosive Stage' - Pyongyang
According to the ambassador, the terrorist group had been active since 2014, with the latest preparations taking place in March and April this year. Kim Hyun Joong stressed that, according to the information at the North Korean government's disposal, the terrorists aimed to "remotely" poison the leadership of the country, planning the attack in a way so that the effect of the poisoning would have shown six months later.

Organizers of the attempts to assassinate the leadership of North Korea will be 'mercilessly destroyed,' North Korean Ambassador said.

"The Ministry of State Security of North Korea has announced that it will find and mercilessly destroy the organizers behind the [planned] terror [attacks] from the CIA and National Intelligence Service of South Korea to the last one," the ambassador vowed.

US' hostile acts against North Korea have recently reached an extreme degree and go beyond all limits, the ambassador added.

"If South Korea <…> maintains its pro-US confrontational posture, they will be doomed," Kim Hyun Joong concluded.

Last week, North Korea accused the US and South Korean intelligence agencies of attempting to assassinate its leader Kim Jong-un.

US Department of Defense spokesperson Capt. Jeff Davis refuted the accusations, saying that there was "no reality that would match them."