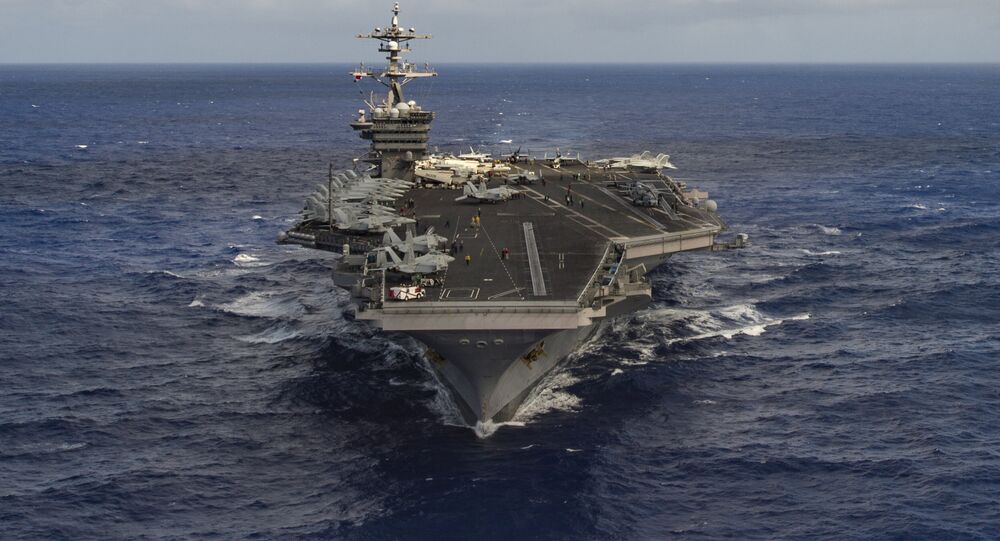 Pyongyang vowed to sink the USS Carl Vinson in what it described as a "show of military force," Reuters reported citing the the newspaper of the North's ruling Workers' Party.

The Pentagon sent the naval group from Singapore toward North Korea earlier in April amid tensions on the Korean Peninsula. US President Donald Trump said an "armada" has been sent, but the date and time of the drill remains unknown.

© Sputnik / Iliya Pitalev
North Korea Could Use Nuclear Arms Against Australia Amid 'Toeing the Line' of US
After it turned out that the Carl Vinson deployed to deter North Korea did not reach the Sea of Japan reportedly because White House and Pentagon failed to communicate effectively and was spotted near Indonesia, it was reported that it will finally reach the Korean Peninsula later this month.

The armada's current location is unknown.

US Vice President Mike Pence said on Saturday that the Carl Vinson would arrive "within days" with no further details provided.

"Our revolutionary forces are combat-ready to sink a U.S. nuclear-powered aircraft carrier with a single strike," the Rodong Sinmun newspaper said as quoted by Reuters.

The North Korean newspaper called the aircraft carrier a "gross animal" and claimed a strike on it would be "an actual example to show our military's force".

© REUTERS / KCNA
N Korea Vows to Launch 'Preemptive Strike' on US Military Bases in Japan, S Korea, US Aircraft Carrier
Earlier, the North Korean General Staff threatened Washington with a "preemptive strike" in case of any "US' provocation;" it also vowed to strike US military bases in South Korea, Japan, the US itself and the Carl Vinson destroyer.