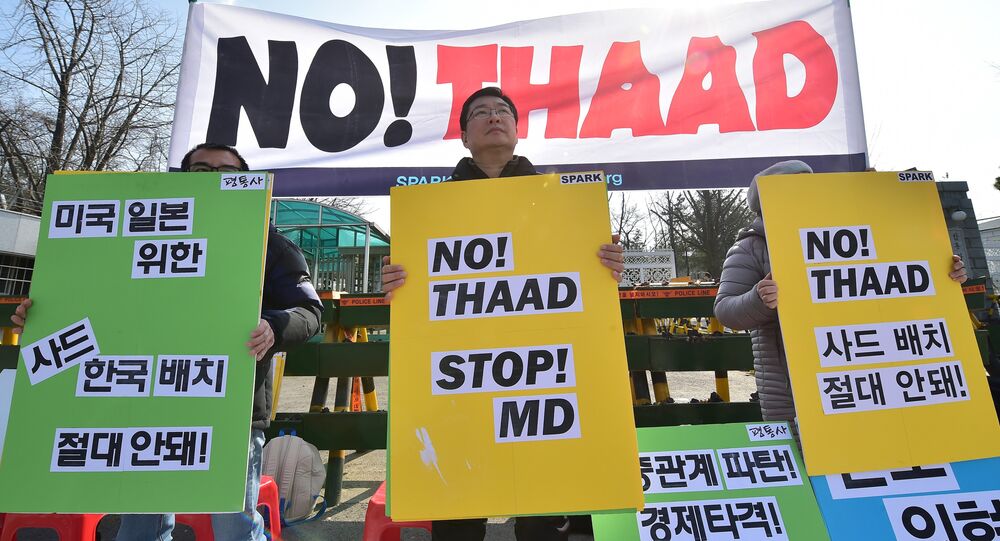 The United States has kicked off deployment of THAAD missile defense systems in South Korea. The move has long been opposed by Beijing. Having failed to talk Seoul into rejecting the deployment, China has resorted to economic counteractions.

© AP Photo / U.S. Force Korea
China Prepares to Counter US THAAD Missile Defense System in South Korea
These days, duty free shops in central Seoul are surprisingly empty. Chinese nationals have traditionally made up the bulk of their customers. In 2016, Chinese tourists accounted for 48 percent of all tourists traveling to South Korea. However, in early-March the flow of Chinese tourists dramatically declined.

This was a result of an unofficial travel ban by the Chinese government in response to Seoul’s reluctance to abandon the THAAD deployment plan. In fact, no official ban was imposed, but the government did not recommend visiting South Korea. Despite being unofficial, the recommendation immediately came into force.

This is the most serious measure Beijing has taken, in a bid to retaliate to Seoul over the THAAD issue. The decision on the US missile defenses deployment was made in summer 2016, as a response to Pyongyang’s increased nuclear efforts. Despite the declared goal of protecting South Korea from possible aggression from its northern neighbor, the move was regarded by China as outrageous.

© Photo : U.S. Army
US to Deploy Gray Eagle Armed Drone Squadron to South Korea - Army
According to official rhetoric, the reason is that the THAAD system is equipped with a powerful radar capable of covering the airspace over the northern part of China.

"However, the more serious reason may be the precedent itself of deploying a US missile defense near China’s border. Despite the fact that the systems planned to be deployed to South Korea are not configured to intercept Chinese missiles, in the long-run this move may pose a threat to Beijing’s deterrence potential," an article on the Russian online publication Lenta.ru read.

As a result, China resorted to decisive actions. Beijing has been the only country to impose restrictions against both Seoul and Pyongyang. As for South Korea, those restrictions can be very serious, taking into account the fact that trade with China accounts for nearly 25 percent of Seoul’s overall turnover.

© Flickr / Mark Holloway
China Warns of 'Consequences' Amid US THAAD Deployment to S Korea
Meanwhile, there have been no official statements on curbing trade relations with South Korea. Instead, Chinese authorities firmly recommend officials and companies to restrict or suspend cooperation with South Korea in certain fields. Any ban on the activities of South Korean companies or on their products can be explained with concrete reasons, rather than politics, including, for instance, violations of fire security norms or safety arrangements. For example, such restrictions have hit many small South Korean firms operating in Wangjing district in Beijing, also known as Beijing’s Koreatown.

The heaviest blow was delivered to South Korean trade, food and service conglomerate Lotte Group. The company reached an agreement to provide its golf course for the THAAD deployment, in exchange for a state-owned plot of land.

In China, Lotte owns a chain of large supermarkets which have been targeted by Chinese authorities. By the beginning of March, 23 stores were closed, officially due to violations of fire safety and sanitary norms.

"Beijing cannot ease its grip on Seoul, and the pressure on South Korea is likely to grow. Restrictions can get even stricter if the new South Korean government does not revise plans over THAAD. There are already discussions on banning a wide range of South Korean goods, from cosmetics to automobiles. It cannot be ruled out that if sanctions get comprehensive and their effect is visible Seoul could make concessions," the article read.

© AP Photo / Ahn Young-joon
S Korea's Embassy in China Launches Task Force to Deal With Anti-THAAD Policies
Meanwhile, what is important at the moment is that by imposing those restrictions China is testing a new model of sanctions which in theory could be used not only against South Korea.

"The sanctions are unofficial, but they really exist, even without an official declaration. They render impossible any claims and appeals from the targeted side, while making Beijing’s actions more flexible. Probably, they could become an important tool of China’s diplomacy," the article concluded.