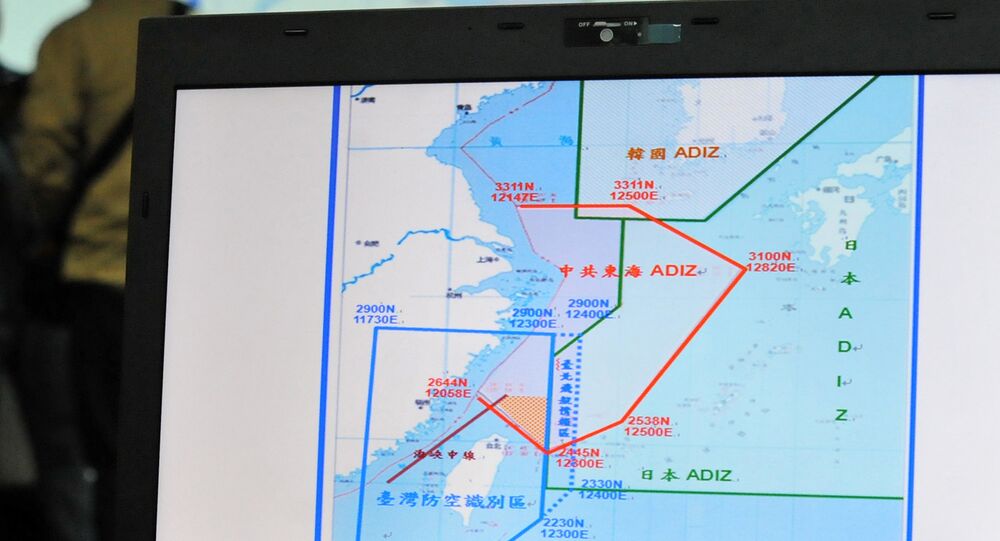 Commenting on China’s recent announcement on its readiness to implement an air defense identification zone (ADIZ) in the South China Sea pending further US moves in the area, one military expert told Radio Sputnik, that in case Beijing proceeds with its plans, it could spark a very serious conflict in the South China Sea.

“It is known only too well, that American, Japanese and South Korean jets continuously annoy China by flying into airspace very close to its borders. It means that an argument on the ground is currently growing into an argument in the air, and it escalates the situation even further,” military expert Viktor Baranets told Sputnik.

© REUTERS / US Navy
China to Proceed With South China Sea Air Defense Zone Pending US Moves
“In order to add weight to its claims for the disputed islands and to send a “military message” to all those who do not agree with the Chinese territorial policy in the region, Beijing has decided to cover the area with a missile defense ‘umbrella’, a serious cooling signal for those who are trying to object to its claims and which lifts the argument into the air space,” Baranets added.

However, the expert noted, the move, in turn, will cause serious annoyance to the US and its allies.

“This ‘umbrella’ is a serious step and I think that the US and its allies will not support the move. These actions might spark a serious conflict in the region very soon,” said the military expert.

“Thanks to China’s recent purchasing of very up-to-date missile defense complexes from Russia and because it has their own developments in the missile defense and even anti-satellite spheres, the Chinese can warn against entering in that area by sea or by air,” Baranets said.

© AFP 2021 / STR
South China Sea: Why Washington Still Can't Break Its Cold War Habits
He also noted that this should force the US, Japanese and South Koreans to sit down at the negotiating table. Otherwise a regional conflict could spark, which very possibly could lead to an international conflict.

On Wednesday, the South China Morning Post citing sources close to the People’s Liberation Army, reported that Beijing is ready to impose an air defense identification zone (ADIZ) over the South China Sea in case the US continues its "provocative" actions in the area.

“If the US military keeps making provocative moves to challenge China’s sovereignty in the region, it will give Beijing a good opportunity to declare an ADIZ in the South China Sea,” the newspaper quotes one of its sources as saying without revealing his name.

The revelation come ahead of the Shangri-La Dialogue in Singapore, a security forum attended by defense officials from various nations, including Admiral Sun Jianguo and US Secretary of Defense Ash Carter.

Disputes in the South China Sea are expected to head the agenda of the three-day event, which starts on Friday.

© AFP 2021 / POOL / Guang Niu
Mounting Tensions: China Prepares to Send Nuclear Submarines to the Pacific to Deter US
Top Chinese and US officials are also set to meet next week for their annual strategic and economic dialogue in Beijing.

“Regarding when to declare such a zone, it will depend on whether China is facing security threats from the air, and what the level of the air safety threat is,” the country’s defense ministry said in a statement sent to the newspaper.

China set up its first ADIZ in the East China Sea in November 2013 to cover the Diaoyu Islands, which Japan calls the Senkakus. Both countries claim the uninhabited outcrops but Tokyo controls them. The ADIZ triggered a backlash from Japan, South Korea and the US.

Tensions between China and neighbors Vietnam, Malaysia, Brunei and the Philippines over sovereignty in the South China Sea have risen since Beijing embarked on major land reclamation work on the disputed islands and reefs in the area.