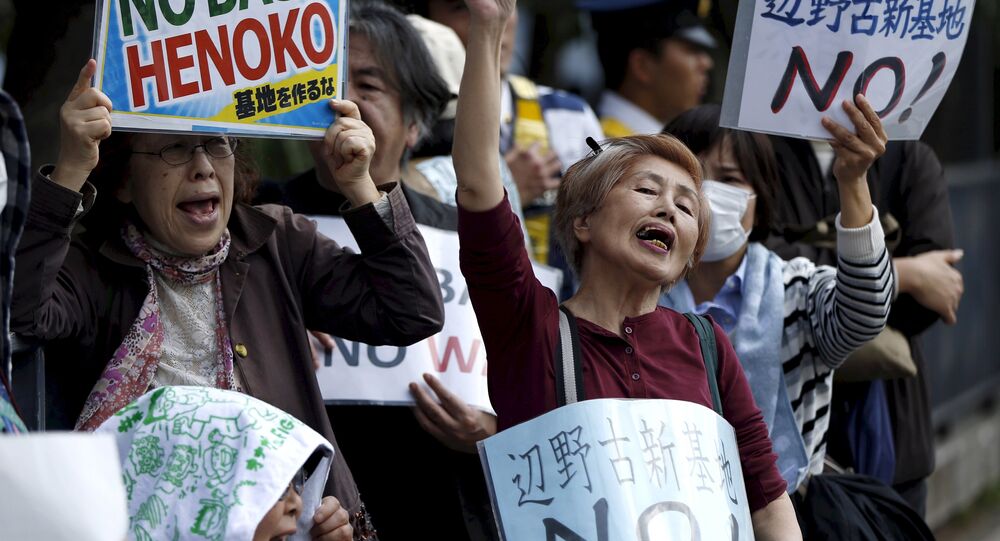 Massive protests were held on a military base in Kadena, Okinawa following the murder of a young Japanese woman by an American soldier. This is not the first time that the US military personnel have committed crimes in Japan.

© AFP 2019 / Toru YAMANAKA
Murder Case in Okinawa: ‘US Soldiers Are Ruthless Because They Are Protected by US Umbrella’
One of the most notorious cases was the rape of a 12-year-old schoolgirl in Okinawa by US Marines in 1995. The incident received wide publicity and led to mass protests.

The recent tragic incident could cause a new wave of anti-Americanism, which is strong in Okinawa, as it houses most of the US military bases, which is according to the head of the Center for Japanese Studies, Valery Kistanov.

“A worse situation for Japan-US relations than the current one is difficult to imagine. This is due to the fact that on May 27 US President Obama is expected to visit Hiroshima after participating in the G7 summit. This visit is seen as historic, as it has been long sought after in Japan by the authorities and public opinion.”

The analyst said that the visit is planned to extract a painful thorn from the Japan-US relations over the US atomic bombings.

“But now the tragic murder may cast a dark shadow on the Japan-US military alliance and the US troops in Japan. The Japanese authorities are concerned and that can be seen by their quick reaction to the incident. Prime Minister Abe has said that he will personally talk with Obama at a summit about this case,” Kistanov said.

© REUTERS / Toru Hanai
Shinzo Abe Outraged Over Links of US National to Murder of Okinawa Woman
In addition, Japan's Foreign Ministry summoned the US ambassador for an explanation. “The commander of the US forces in Japan has already apologized, although, as it is known, Americans do not apologize,” the analyst added.

Although the Japanese side has demanded that the US make every effort to prevent such incidents in the future, it is obvious that this cannot be achieved, Kistanov noted.

“In order to avoid such tragic incidents in the future, it is necessary to either not allow Americans to leave the base or to withdraw US forces from Japan. However, it is clear that neither of these options is actually possible. Therefore, such cases will continue.”

“The Americans are unlikely to agree to remove their bases from Okinawa because from this archipelago they are keeping an eye on China and the situation on the Korean peninsula,” the analyst concluded.

Japan Decides to Stop Works on US Airbase Relocation in Okinawa

US Man Arrested in Connection With Disappearance of Okinawa Woman