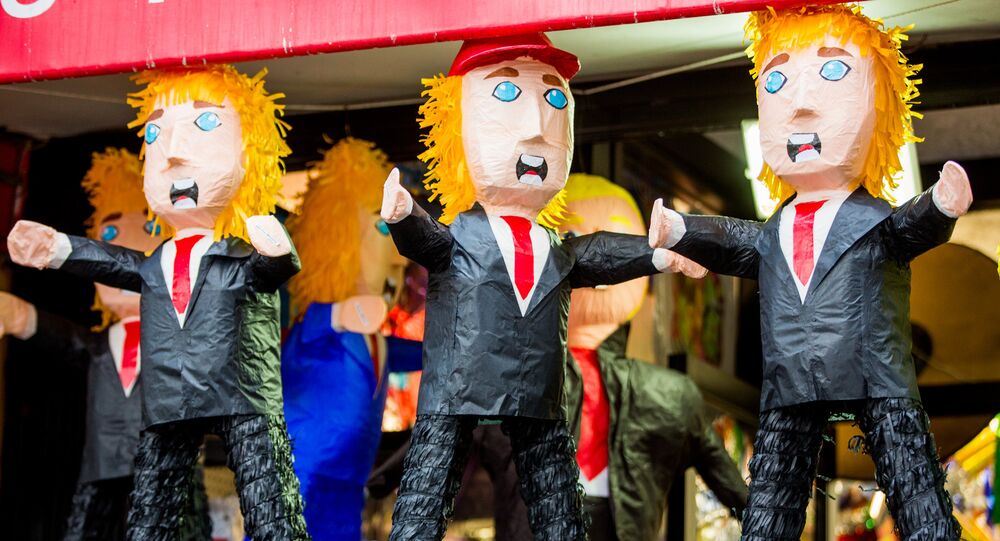 © AFP 2021 / JIJI PRESS
Expansion to the East? Japan Slowly ‘Moving' Toward US
Talking about what Japan should expect when a new president comes into the White House, a well-known Russian orientalist and a former Russian Ambassador to Japan, Alexander Panov, spoke to Sputnik.

“Trump said that the United States must defend Japan and even start a third world war if need be, but Japan should not defend Japan. It was a criticism of the fact that Japan does not take enough responsibilities on their defense cooperation. Perhaps, if Trump wins, he will insist on revitalization of Japan's participation in military cooperation with the United States,” Panov told Sputnik.

Regarding Russia, Trump has a more realistic position than Obama, according to the analyst. “Trump believes that it is necessary to negotiate and cooperate with Russia because it is useful to the United States for the solution of international problems.”

“But Clinton has an even tougher stance on Russia than Obama. Therefore, if Japan wants to establish relations with Russia and Abe will visit Sochi, in the future there may be different approaches depending on who becomes president. This may have an impact on Japan's policy toward Russia. Japan will have to adapt to demands of the US. But right now it is difficult to predict what will happen, because the election slogans of the candidates do not necessarily translate into action when the candidates become presidents,” the analyst said.

© AP Photo / AP
Donald Trump Wins Republican Primaries in North Carolina, Illinois
Talking about whether Japan is now trying to predict how US policy may change towards China, the analyst said, “Japan is very closely monitoring US policies toward China. Judging by the statements of the candidates, the challenge and the rise of China is seen differently by different candidates. Some say something about the need to contain China, because it is too active in the South China Sea. But all of these are just applications that do not make any changes to the policy pursued under Obama.”

The analyst further spoke about how the United States will seek to create the Trans-Pacific Partnership (TTP) and how Obama said that if the US does not write the rules of economic cooperation in the region, the Chinese will do it for them.

According to Panov, “All of that shows deterrence but at the same time there is no intention to aggravate relations with China. There is an aim to cooperate and make certain concessions. The yuan has become the reserve currency and China's share of votes in the International Monetary Fund may increase.”

There were statements by Li Keqiang that Beijing does not consider the US military presence in the region as a threat to China.

“China went on to cooperate with the US in sanctions policy toward the DPRK. In other words, now there was a paradigm of relations between the US and China — containment and cooperation. At this stage it is in the US’ interests. Beijing, of course, is not happy with the fact that the United States and Japan want to cordon China. But on the other hand, it is not particularly possible. Therefore, strategically, there are no serious changes.”

“I do not think that the US policy toward China will seriously change under the new president, no matter whether it will be Trump or Clinton,” Panov concluded.

Donald Trump and the Dark Rise of American Authoritarianism