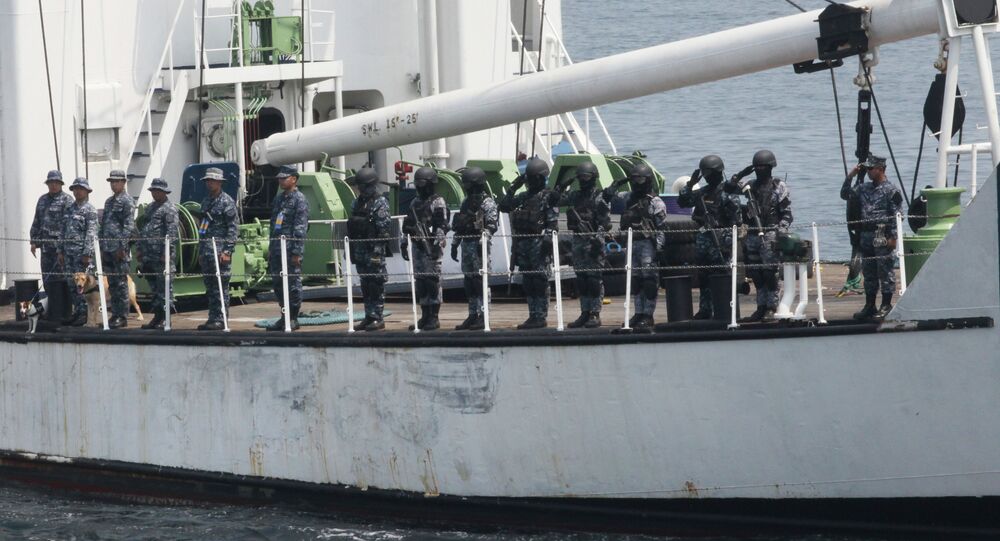 Amid rising tensions in the disputed South China Sea, the latest in a series of provocative joint military exercises took place between the Philippines and Japan. This despite the fact that Japan doesn’t even have an official claim in the region.

As part of their first joint naval exercises, two Japanese destroyers participated in a maritime safety exercise with a Philippine warship. The drills occurred off the coast of Manila, in the waters of the South China Sea.

The exercises coincide with Japan’s plan to coordinate coastguard search and rescue operations with Vietnam this week.

© AP Photo / Bullit Marquez
A "wounded suspect" is airlifted by a helicopter during a combined maritime exercise by Philippine and Japanese Coast Guards off Manila Bay.

The South China Sea is a hotly contested region. While China stakes a claim on roughly 90% of the area, there are disputed, overlapping claims by Vietnam, Taiwan, the Philippines, Brunei, and Malaysia. Japan has no official territorial claim in the sea, but Prime Minister Shinzo Abe indicated his nation’s interest in ensuring free travel through the region. Nearly $5 trillion in trade passes through the South China Sea each year.

The exercises could be meant as a clear signal to Beijing.

"But in a low-key, but understandable, manner it’s sending a message to the Chinese leadership that 'Even if you use force to expand your sphere of influence, there is a limit to what you can do and the other countries in the region are willing to stop it,'" Narushige Michishita, of Tokyo’s National Graduate Institute for Policy Studies, told Reuters.

That "growing influence" refers in part to China’s construction of artificial islands in the Spratly Archipelago. The United States and its allies have called those island reclamation projects illegal, though Beijing has maintained it has every right to build within its own territory.

Despite criticism of China’s island construction, both Vietnam and the Philippines have engaged in their own controversial land reclamation projects.

In the face of these latest exercises, China has urged for calm.

"We hope the relevant countries will respect efforts made by countries in the region to safeguard peace and stability, and refrain from hyping up tensions or harming national security and mutual trust," Chinese Foreign Ministry spokeswoman Hua Chunying said.

That plea has been ignored so far. These latest military exercises are the latest in a series. Last month, the Philippines held separate joint military exercises with the US. While those war games are an annual event, this year’s drills doubled in size, with nearly 12,000 soldiers participating.

Last month, Tokyo also announced the possibility of joining US patrols in the South China Sea. The Pentagon began flying its most advanced spy plane, the P-8A Poseidon, out of the Philippines to monitor the region, and Japan could be incorporating its own air patrols.

"We have to show China that it doesn’t own the sea," an anonymous Japanese defense official told Reuters.

Tokyo is also under contract to build ten coastguard ships for the Philippines.