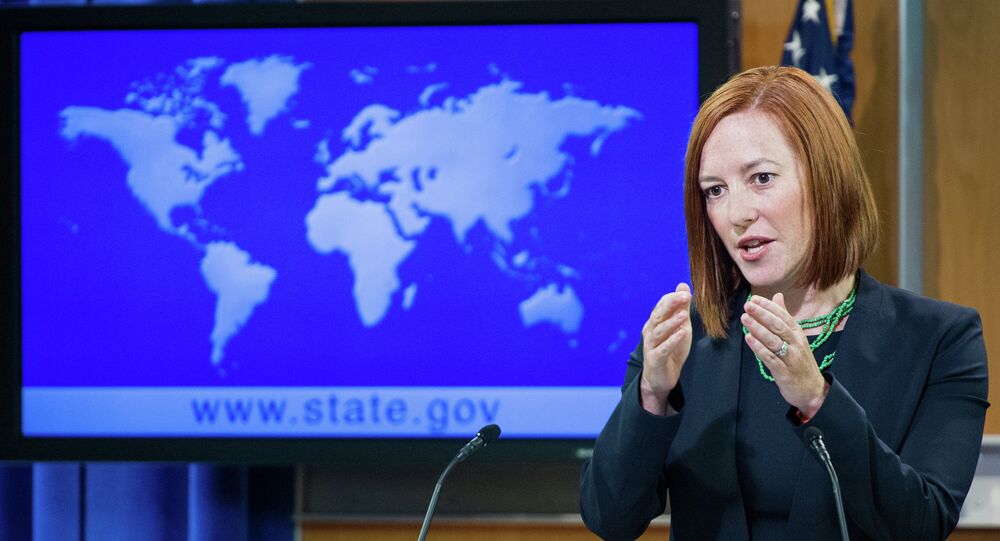 The message by North Korea proposed that Washington should contribute to easing tensions on the Korean peninsula by suspending all of this year’s joint military exercises in South Korea.

MOSCOW, January 10 (Sputnik) — The United States on Saturday criticized a proposal by North Korea to suspend further nuclear tests if Washington agrees to call off joint military exercises with South Korea as "an implicit threat".

Pyongyang was "inappropriately" linking routine US-South Korean military drills to the possibility of a nuclear test, according to Jen Psaki, State Department spokeswoman.

Maria Frolova
N Korea Offers to Suspend Nuclear Tests in Exchange for End to US Drills
"A new nuclear test would be a clear violation of North Korea’s obligations under multiple UN Security Council resolutions," Psaki told journalists as quoted by AFP.

North Korea’s proposal was conveyed to the US government through a "relevant channel" on Friday, the North Korean KCNA news agency said.

The message proposed that Washington should contribute to easing tensions on the Korean peninsula by suspending all of this year’s joint military exercises in South Korea.

Psaki stressed that the US "remains open to dialogue with" North Korea, but talks have to be focused on "returning to credible and authentic negotiations on the denuclearization of the Korean Peninsula".

"We call on the DPRK (North Korea) to immediately cease all threats, reduce tensions, and take the necessary steps toward denuclearization needed to resume credible negotiations," she added.

The US has some 28,500 troops stationed in South Korea and conducts joint military exercises with its key Asian ally every year. Pyongyang has called the drills a rehearsal for an invasion. Meanwhile, the US and South Korea have stated that the annual drills are defensive, aimed at testing their readiness to confront any possible North Korean aggression.

© East News / KCNA
New N Korean Military Plan Envisages Occupying S Korea Within Seven Days
Psaki said the exercises were "transparent, defence-oriented, and have been carried out regularly and openly for roughly 40 years", according to AFP.

North Korea conducted three nuclear tests – in 2006, 2009 and 2013. Recently, it threatened a fourth test in response to a UN resolution that condemned alleged human rights abuses in the country.

Western experts think North Korea has some rudimentary bombs, though the country is not believed to be capable of producing warheads that could be mounted on a long-range missile to reach the US. However, a fourth test could bring the country closer to the goal.

The Korean peninsula remains divided along the heavily armed border after the Korean War ended with a ceasefire and no peace treaty was signed.

In the spring 2013, tensions in the region spiked after Pyongyang made a series of threats to conduct nuclear attacks on Seoul and Washington as a means to denounce UN sanctions that were toughened after the North’s third nuclear test.