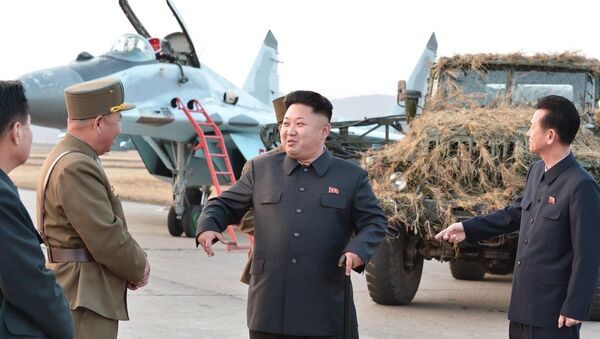 The plan was reportedly adopted on August 25, 2012, during a meeting between North Korean leader Kim Jong Un and top military officials. Kim has since held three more meetings with top generals and conducted several inspections of the North Korean Army to monitor the implementation of the plan. The preparations were initially planned to end in 2013, but the deadline was extended until the end of 2014, according to JoongAng Ilbo.

In the event of a conflict, the North Korean military is to occupy South Korea within seven days, eliminating the possibility of US troops to provide sufficient support for its allies. In the course of the possible fighting, North Korea plans to use non-conventional weapons, including nuclear weapons and missiles, to defeat South Korean and US troops located on the peninsula at the early stage of the war. Conventional weapons, such as tanks, artillery and military aircraft, are planned to be used in the final stage of the conflict, the newspaper reported.

North Korea's Missiles Able to Reach US Mainland: South Korea
North Korea came to the conclusion that it would not be able to handle a drawn-out conflict with South Korean and US troops and therefore created the seven-day war plan, JoongAng Ilbo reported, citing a South Korean intelligence official.

South Korean authorities stated they were aware of the North's plan and were currently studying it.

North Korea has been recently increasing its defense potential. Pyongyang held its most recent nuclear tests in 2013, while in 2014, North Korea conducted 108 missile launches.