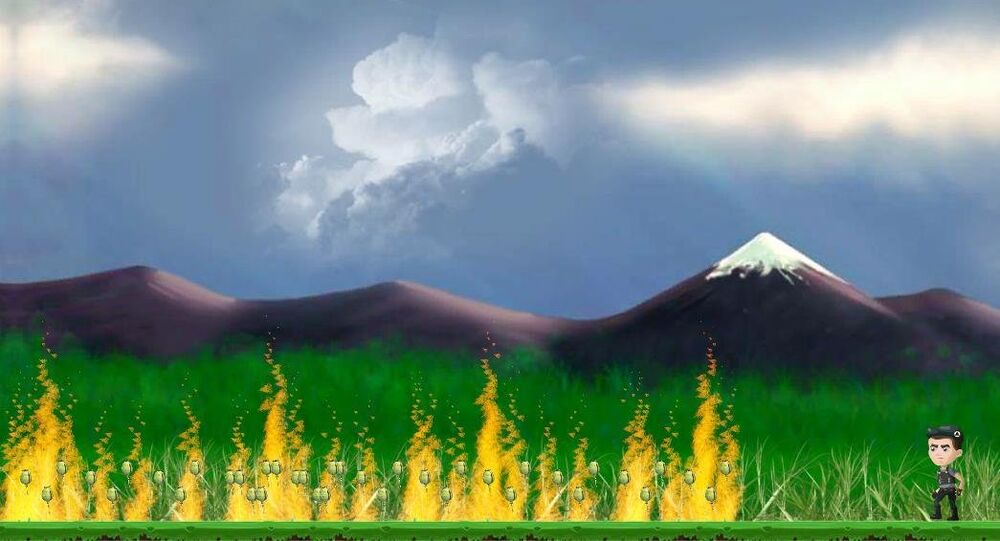 In Afghanistan's Herat Province, students of the Code to Inspire computer programming center for women have created a game called Fight against drugs. The aim of the game is to destroy the opium poppy fields in Helmand (the province believed to be one of the world's largest opium-producing regions).

In Afghanistan's Herat Province, students of the Code to Inspire computer programming center for women have created a game called Fight against drugs. The aim of the game is to destroy the opium poppy fields in Helmand (the province believed to be one of the world's largest opium-producing regions). There’s also a creative capacity in the game – when cleared from the opiate, the fields are scattered with saffron.

Hasib Rasa, the head of the center where girls learn and work, told Sputnik what caused them to create such game.

“In 2015 in Herat, Fereshta Forough founded the Code to Inspire center. Its task was to train women in computer literacy and programming. At the moment there are about 100 girls at the center. They develop computer games, smartphone apps, they also design websites. The students are trained from scratch, to an advanced level.”

According to Rasa, the girls are so much into computer technology that they've become full time employees.

“We expected them to learn basic computer skills for the first couple of years. However their potential proved to be much bigger than we had expected. The girls started doing that professionally. At the moment our students are working on many projects including some foreign ones. So far, they’ve created 22 computer games and 15 stickers” – the head of the center says. These stickers are used in WhatsApp and Telegram and they convey Afghan culture and traditions.

Rasa highlighted that all the students try to express their inwardness through their computer games:

“Students of all ages try to echo the pain they feel from world events in their games. Typically, the games that are now created have nothing to do with any particular event. They’re developed just for fun. Here it is not the case. We choose some painful issues and then offer to solve them through games.”

© Photo : FB/Code to Inspire
Sticker, the address of Afghanistan's culture on social networks

The issue of drug cultivation, production, smuggling and consumption is one of the most acute for Afghanistan, especially among the younger generation. By creating this game, the students of «Code to inspire» center wanted to sow hate and disgust for drugs in the minds of the young:

“The students of our center wanted to show the world that they are against cultivation, production, smuggling and consumption of drugs. Drugs are wrong. There’re thousands drug addicts among youngsters” – Rasa said.

The «Fight against drugs» game is based on actual events. The point of the game is that a Helmand Province citizen goes through different game levels while destroying the opium poppy fields and scattering them with saffron.

© RIA Novosti .
Russian Deputy FM: Western Coalition Not Doing Much to Curb Drugs in Afghanistan
The game also features Afghan security officials that are fighting with drug smugglers. The first part of the game was released three months ago and it’ll soon become available. According to the head of the center, the game has become famous outside Afghanistan:

“Though the game is available for a free download, many countries, such as the US, India, Pakistan, Malaysia, Iran and some others are ready to purchase it”.

In order to develop its activities, the center needs the assistance of the Government and the people:

“Fortunately, our students don’t have any serious problems. The only problems of our society are lack of coordination and lack of support. What we’re asking the Government and the people for is to provide assistance and support for the girls’ work. Even foreigners and Afghan people living abroad have been more supportive.”

The Ministry of Counter-Narcotics together with local authorities appreciated the girls’ call to spread the game among young people. They think that such a step might have a beneficial effect on drug-control as young people are constantly using their smartphones and play games.