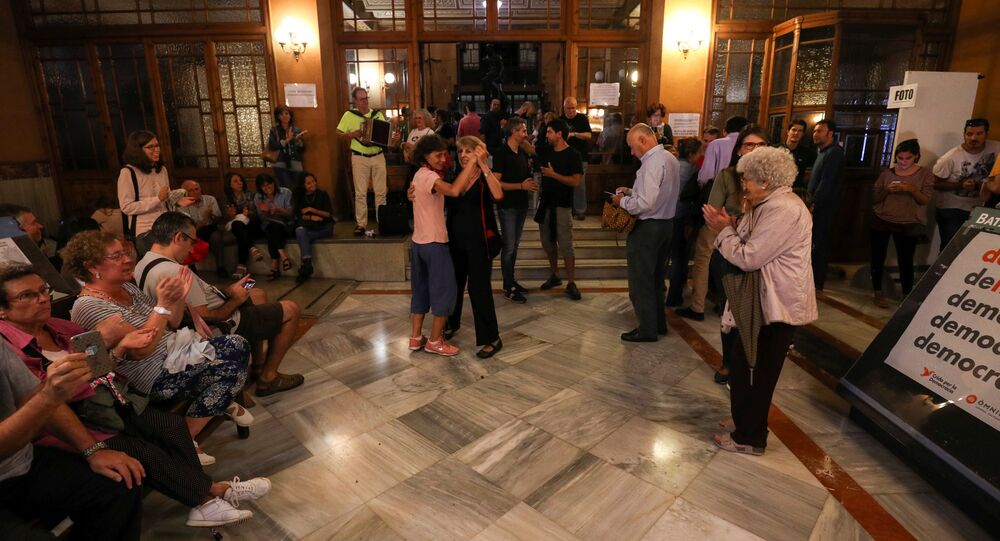 'They Will Have to Carry Me Out': Catalonia Voters Vow to Defy Madrid

As Madrid forces crack down on Catalonians, locals have vowed to defy court orders threatening criminal charges against those who seek to exercise their right to vote for independence from Spain.

Catalonian families have been told by Madrid security forces that they must vacate schools in which they are encamped overnight, awaiting the opening of polling stations in the region.

Preparing for early-morning scuffles with police, some parents spending the night at polling stations have opted to send their children home, according to Newsday.

Protests have erupted in cities across Spain, as tensions run high regarding the separation referendum.

Polling stations, many of them hidden by local voters from police sent to the region by Madrid from outlying areas across the country, are expected to open at 9 a.m., local time. Madrid government security forces have given occupants of school polling locations in the region until 6 a.m., local time, to vacate the structures, or risk arrest.

The Catalan governing body, noting the large and heavily-armed police presence arriving in the region, has urged non-violent resistance.

The Interior Ministry of Spain has claimed that "most" of the area's 2,315 polling stations have been closed by Madrid police, and that software intended to be used to document the referendum vote tally had been disabled.

At a designated Barcelona polling station, one voter stated that he had sent his daughters home ahead of the Sunday vote, as he expected to be arrested.

"Who knows what will happen if the Guardia Civil comes?" the voter said, cited by Newsday, adding that he would adhere to the policy of peaceful resistance, but would not voluntarily leave the building unless he could exercise his right to vote.

Catalonia, with a unique language and culture, is not recognized as a sovereign nation under the terms of the Spanish constitution.

Calls for an independent Catalonia have increased over the past five years as government-instigated austerity programs implemented after gross financial mismanagement — similar to those decreed in Greece in 2014 — have significantly affected the Spanish people.