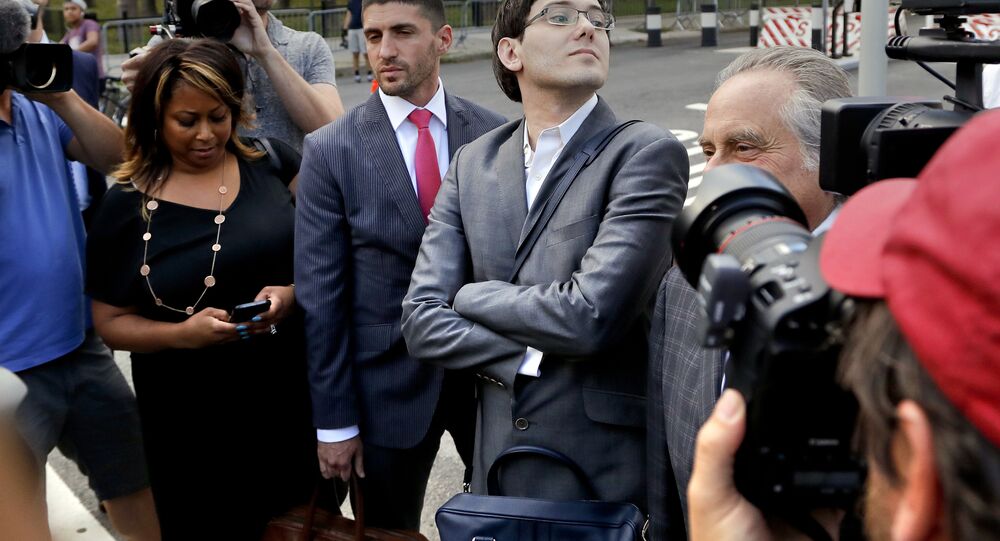 Former pharmaceutical exec Martin Shkreli has been thrown into jail for a Facebook post offering payment for obtaining Hillary Clinton’s hair. The news sparked an immediate reaction on social media, with thousands of user storming Twitter with comments.

Shkreli was convicted on three criminal charges, including securities fraud and wire fraud. The former CEO, known in the US as "pharma bro," is facing up to 20 years in prison. He was out on $5 million bail, but on Wednesday it was revoked. US federal judge Kiyo Matsumoto ruled to jail Shkreli, deeming him a "danger to society."

Many just seemed happy to see the "most hated man in America" behind bars.

Everyone on Twitter seeing Pharma dumbass Martin Shkreli is going to jail. pic.twitter.com/qaHalsXGBs

​​​Some were quick to bring up one of the most despicable facts in Shkreli’s biography. In 2015, the then-CEO of Turing Pharmaceuticals bought the rights to Daraprim, a critical drug to treat AIDS. The company hiked its price by 5,000 percent. The move provoked nationwide criticism and public anger.

If you're in jail with Martin Shkreli, please make sure you charge him %56300 more than everyone else for anything he wants to buy.

Martin Shkreli $5,000 for a single hair? An entire wig is only like $30. Who would mark up a product like tha….ohhh right.

​On September 4, Shkreli wrote on Facebook that he would pay $5,000 to each person who obtains a strand of Hillary Clinton’s hair during her book tour. Later, he deleted the post and apologized. Some users, however, assumed that jail was too much of a punishment for a joke, no matter how sick it is.

wether you like him or not, sending #MartinShkreli to jail over a joke sets a worrying precedent for judicial overreach.

only in merica will u go to jail for throwing a joke at a powerful figure, but not raising 5000% on a necessary malaria drug🙄 #MartinShkreli

just shows how dumb and corrupt the system is. Martin may have gone too far with a joke, but key word being JOKE. #MartinShkreli

​In particular, some recalled an outrageous stunt by comedian Kathy Griffith who earlier this year posted a photo of her holding a bloody faux Donald Trump head.

Liberals constantly threaten to kill President Trump and nothing happens but Martin Shkreli makes a joke about Hillary and goes to prison? 🤔

​​One user jokingly speculated about Shkreli’s possible career in the White House, referring to his repeated attempts to troll the former Democrat presidential candidate.