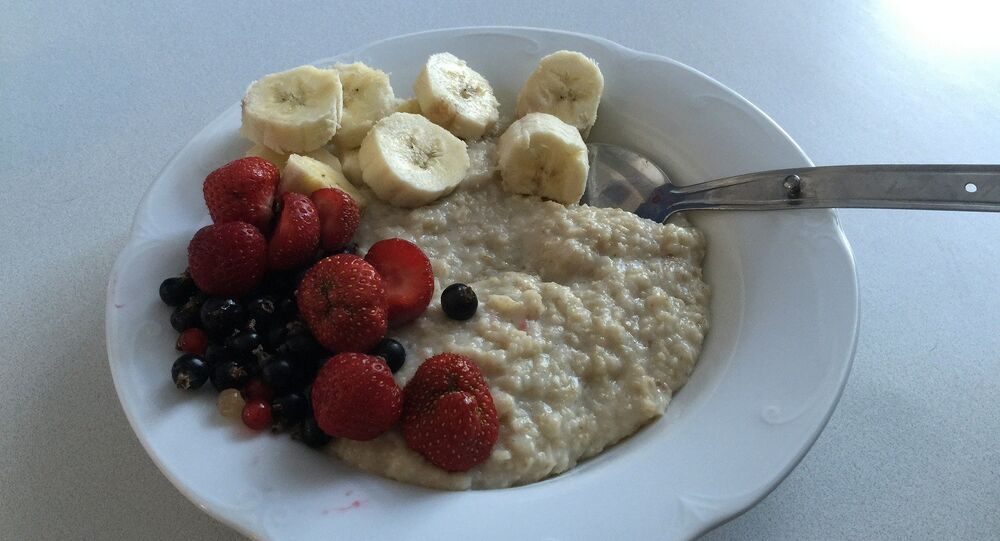 As part of their perennial drive for organic food and also to celebrate the country's centenary jubilee, eco-minded, patriotic Finns have set a world porridge eating record.

In total, 390,230 portions of organic cereal were eaten across Finland on Wednesday, in an unconventional bid to promote organic cuisine. The move also celebrated the Nordic nation's 100-year anniversary.

On the record day, almost every fourth Finn was served organic cereal in the Finnish Organic Food Organization (Pro Luomu) project. Out of the 300 organizations that participated, schools and kindergartens provided the biggest contribution, while even military garrisons and prisons took part in the challenge, which is arguably the first of its kind, the Finnish daily Keskisuomalainen reported.

© AP Photo / JONATHAN NACKSTRAND
Special Olympics: Tight-Lipped Finns Organize Small Talk Showdown
According to Pro Luomu, the goal of the challenge was to raise awareness about organic food in an easy and fun way.

"If all Finns ate organic for only one week, it would save the necessity of spraying 4,800 liters of pest killers during the season," Pro Luomu executive director Marja-Riitta Kottila said in a statement.

Kottila argued that the organic cultivation of grain crops, which entails not using pesticides or artificial fertilizers, would help avoiding such agricultural problems as chemical degradation and the erosion of soils, while also increasing biodiversity and helping to conserve natural resources.

According to Pro Luomu's survey, 57 percent of the Finnish catering services in Finland believe it fully possible to switch to organic flakes.

This year, which marks the 100-year anniversary of Finland's independence from the Russian Empire, has been crammed with various events. However, not all of them have been ceremonial suit-and-tie occasions for statesmen and celebrities.

In July, Finland broke a world record in skinny dipping, after close to 1,000 bathers dared to plunge into the cold waters of Linnunlahti Bay in Joensuu, eastern Finland. The record was broken during the Ilosaarirock festival, which dates back from 1971 and ranks among Europe's oldest.

Gotta love my hometown #Joensuu. Appr. 800 naked swimmers and the new national record is made! pic.twitter.com/oYi4zijZSu

​In June, Finland even made an attempt at the world record for mass dancing, as hundreds of thousands of Finns participated in the simultaneous Hula Hula Finland dance to celebrate Midsummer together with the country's jubilee. While 222,542 Finns reportedly joined the dance on the Midsummer Eve, the effort nevertheless fell short of the Dutch record of around 275,000 dancers.

​Speaking of formal occasions involving diplomats, Nordic diplomats participated in last week's hobbyhorse race in Australia to attract attention to such unconventional Finnish pastimes as hobbyhorse racing and wife carrying, as well as tournaments in air guitar and mosquito killing. Incidentally, the race was also dedicated to Finland's jubilee.

In yet another quirky celebration, the Helsinki Museum of Contemporary Art, Kiasma, began displaying an ambitious 1,000 year-long GIF by Finnish artist Juha van Ingen. The installation is called AS Long As Possible (ASLAP).