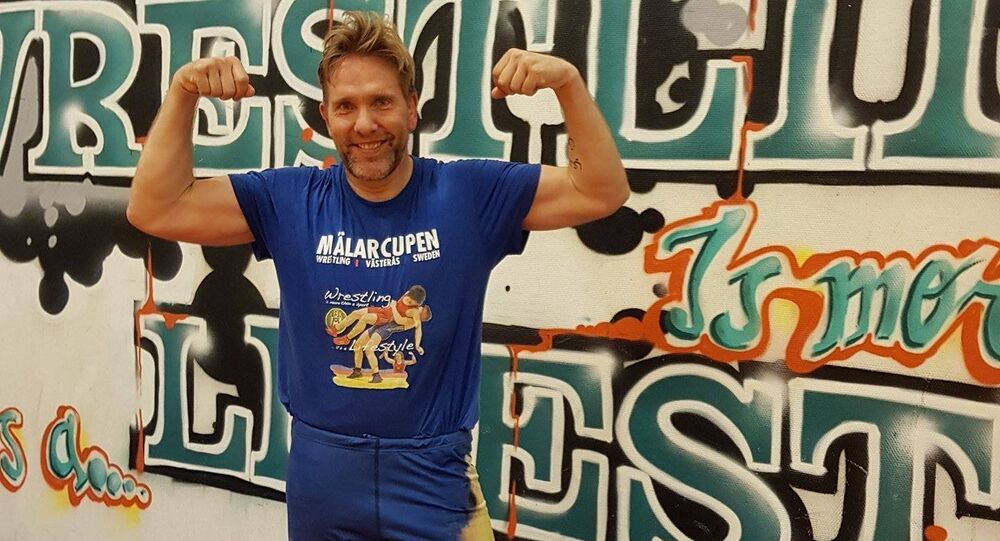 Your tongue will get you anywhere, they say. To his surprise, a Swedish guard has woken up as an internet sensation after having spoken Arabic to a passerby, who happened to film this rare occurrence. For some reason, the clip went viral, propelling the Arabic-speaking Swedish guard to instant internet stardom in the Arab world.

Security guard Kalle Alm from the Swedish city of Västerås has unwittingly taken the Arabic internet by storm owing to a clip in which he speaks fluent Arabic to a shocked passerby.

In the clip, which has been watched by over a million of viewers, Kalle used an Arabic moniker Abu Kevin (which means "father of Kevin") and talked about his passion for Syrian TV shows, Swedish national broadcaster SVT reported.

© Sputnik / Yury Abramochkin
Swedish McDonald's Learns to Speak Arabic Due to Popular Demand
By his own admission, Kalle has become a kind of a local celebrity. Over the past weekend alone, he was approached by dozens of strangers who recognized him and expressed their approval.

"They were all so happy, and now I'm happy too. They put their hands on their chest and said 'We like you," Alm said.

In 1994, Kalle married a woman from Syria, who suggested that he should try and learn a little Arabic to better understand her family. When they had children, the family decided to speak Arabic only, so that the children would have the chance to learn a second language at home.

"I was not shy. I went on talking even if it came out all wrong. I talked, and talked and talked. My wife was stubborn, and so was I. It became like a match I had to win. After a while, my friends even said I picked up an Arabic accent," Kalle recollected.

By Kalle's own admission, the new language skills proved very valuable for his personality and worldview, helping to build new bridges.

"I mastered the language; I got to know the people. I got a new family. One day my mother-in-law came to me and said she did not feel any difference between me and her sons. I am Swedish, but sometimes I do feel Arabic too. I'm not a stranger anymore.

© AFP 2021 / JEAN-SEBASTIEN EVRARD
Sweden Resorts to Arabic Glossaries to Find Common Language With 'New Swedes'
Meanwhile, Arabic is estimated to have become Sweden's second most used language, having surpassed Finnish some time in 2016. The Arab diaspora is growing rapidly, owing to the recent influx of asylum seekers. In the past two years alone, Sweden, a country of 10 million, took in about 200,000 asylum seekers, predominantly from Arabic-speaking countries. By contrast, the historic Finnish-speaking population is ageing and gradually ceding ground, after being Sweden's largest minority for centuries.

Swedish Radio has had broadcasts in Arabic since 2013. In April 2017, Sweden arranged its first-ever Arabic book fair, epitomizing the growing importance of Arabic in everyday life.