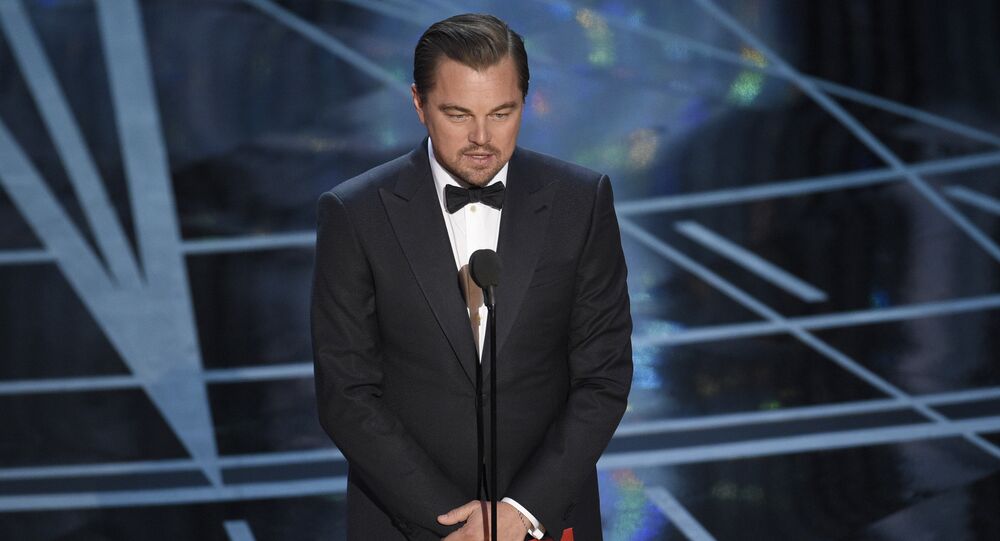 After Leonardo DiCaprio was seen strolling around New York City with a purple plastic bag tied at his waist, the internet lost sleep over the actor’s “street fashion” ideas.

© Photo : Youtube/Sarıkaya TV
Leonardo DiCaprio Visits Famous Turkish Butcher 'Salt Bae' for Steak
Red-carpet DiCaprio and everyday-life DiCaprio look like two different people. The actor feels comfy walking around the streets in stretched T-shirts and sweatpants. In the latest photos from New York, Leo was snapped rocking a basic T-shirt and sagging cargo shorts with underpants peeking from under them. His image would be incomplete without accessories. To top it off, DiCaprio tied a shirt around his waist, threaded the shirt through short's belt loops and… knotted a purple plastic bag to it.

People Really Want To Know What Leonardo DiCaprio Is Carrying In This Plastic Bag https://t.co/2BkWIFzFzy pic.twitter.com/4RcM8seT4X

Why does Leo go around town with a purple plastic bag tied to his shorts? Does he feed the pigeons? pic.twitter.com/40UeP8Zjiq

Some Twitter users suggested he just lost a bet, while others argued that the actor (who is an environmental activist) should have worn a reusable shopping bag instead.

According to GQ, Leonardo took his lazy-day style to a new level: "We can't even call it a murse or a man bag, as that would be insulting to murses and man bags. This is just a plastic bag you'd get when buying some T-shirts on Canal Street or buying beer at your local bodega," the magazine wrote.

What is the most trash part of Leo's outfit? (Hint: it's not the literal trash bag tied to his waistband) pic.twitter.com/ErtNYzNV0m

​W Magazine called it "an accidental high fashion statement," recalling that just days before DiCaprio was sporting his look, one of New York's most acclaimed young menswear designers, Patrik Ervell, demonstrated similar belt loop bags on the runway during New York Fashion Week: Men's. What's more, the designer's nylon bags were as brightly colored as the actor's one.

​Vanity Fair noted this was a smart way to keep his hands free, so that Leo "can do other stuff — like rub his belly, read something hilarious on his phone and walk while swinging his arms in equivalent vacillations."

Another thing that worried people was the contents of the bag.

Tabloids were joking around, suggesting it was his Oscar, next blockbuster script or vaping accessories. What is your guess?