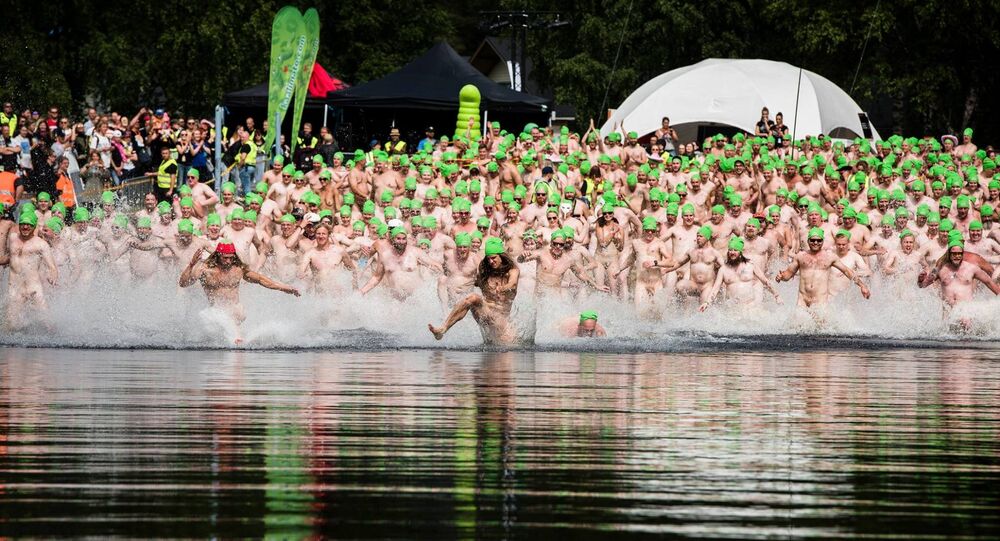 While Finland most often evokes thoughts of steamy saunas and hikes in dense woods, Finns are also keen on other worldly pleasures. The past weekend, hundreds of Finns gathered in the town of Joensuu to break the world record for the largest number of people swimming naked at once.

The glorious plunge was announced a few weeks earlier as a challenge for the ticketholders of the popular music festival Ilosaarirock to mark Finland's centenary jubilee, which is widely celebrated this year.

Although the initial goal was to gather 1,000 skinny dippers (hence one thousand green hats stocked up), the turnout was, nevertheless, enough. Before the scheduled dip, things did not look good, as only a few hundred people were undressing for the challenge. However, the sun came out at the right moment, inspiring the wavering crowd with the resolution needed.

The swimmers had to stay in the water for at least five minutes in order to break the previous record set at Perth's South Beach on March 8, 2015.

After some splashing and shouting, the naked crowd reportedly broke into a song and started chanting Finland's national anthem in order to celebrate the occasion.

Gotta love my hometown #Joensuu. Appr. 800 naked swimmers and the new national record is made! pic.twitter.com/oYi4zijZSu

Previously, Finland has made two unsuccessful attempts at the world record by alluring naked swimming aficionados to make a collective effort. However, the previous attempts in Helsinki in 2015 and 2016 failed miserably, as only a few hundred willing participants showed up.

In June, Finland made an attempt at the world record for mass dancing, as hundreds of thousands of Finns participated in the simultaneous Hula Hula Finland dance to celebrate Midsummer and Finland's centenary jubilee. While 222,542 Finns reportedly joined the dance on the Midsummer Eve, the effort nevertheless fell short of the record set by the Dutch of around 275,000 people dancing simultaneously.