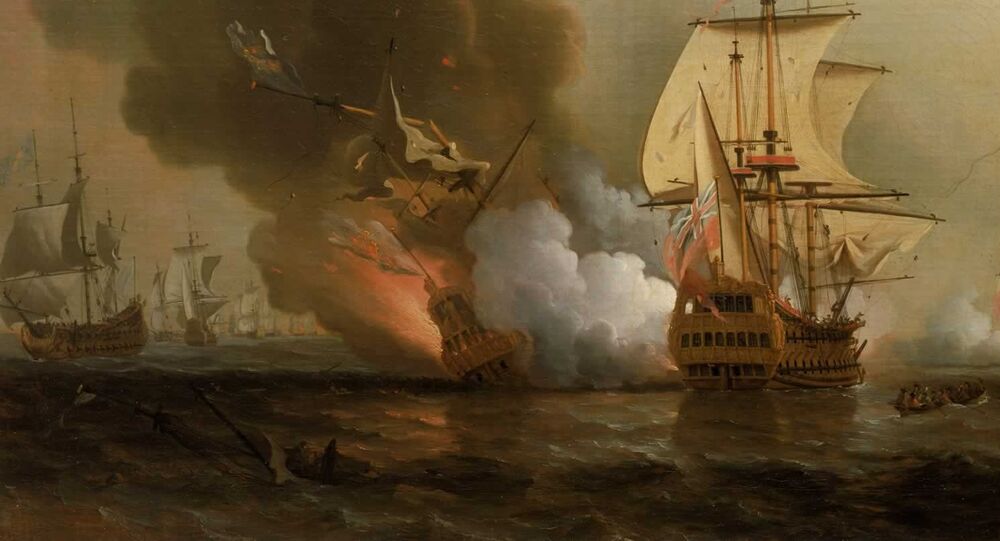 Things are heating up in the Caribbean as Colombia, Spain and a US-based salvage company are waging a courtroom battle for the legendary treasure of the San Jose galleon.

© Photo : pixabay
Centuries-Old Sailing Vessels Found Near Russian Island in the Baltic (VIDEO)
The San Jose, a galleon of the Spanish treasure fleet, was sunk by HMS Expedition during a battle known as Wager’s Action off the coast of Cartagena, Columbia on June 8, 1708.

And now, over three centuries since that fateful day, three parties are waging a very different sort of battle for the remains of the San Jose and the vast cargo of jewels, gold ingots and other treasure worth up to $17 billion that the ship was carrying.

In 2015 the scientists of the Colombian Institute of Anthropology and History, with the aid of the country’s naval forces, managed to locate the wreckage of San Jose, and in 2016 Colombian President Juan Manuel Santos declared that the country intends to recover the vessel.

Antonio Jose Rengifo, maritime law expert at the National University of Colombia who spent nearly two decades in courts helping Bogota lay claim on the San Jose’s remains, told Sputnik Mundo that there’s a number of reasons to believe that the treasure of sunken galleon rightfully belongs to Colombia.

"It all began during the search for the galleon: in 1980 a certain American underwater exploration company appeared. The company declared its intent to locate the San Jose and obtained permission to conduct the expedition. When a salvage company locates a shipwreck, it is legally obliged to report the coordinates of the find; it also becomes entitled to claim a percentage of the find’s value, which is determined by the legislation of the country in question," Rengifo said.

The wreck of San Jose was apparently discovered by a US-based salvage company called Sea Search Armada in 1994.

The company then demanded to find out the exact size of its ‘finder’s fee’ and in 2007, after years of litigation, the Colombian Supreme Court ruled that the Sea Search Armada is entitled to half of the treasure carried by the San Jose.

Rengifo however challenged this decision, arguing that Sea Search Armada provided fake documents while making its claim and challenging the legitimacy of the company’s rights to conduct underwater explorations which it obtained in 1982.

"We maintain that their license is false because it was obtained by bypassing the proper administrative procedure. If the Council of State decrees that these documents are indeed false, the court would have to revise its decision as it was originally made under the assumption that the documents were legitimate," he explained.

The situation changed when President Santos declared that the wreckage of San Jose was located by Colombian scientists. And while Sea Search Armada claims that this discovery was made possible thanks to the coordinates provided by the company in 1994, Rengifo argues that the data supplied by the salvage firm does not correlate with the demand to provide the exact location of a sunken vessel.

Meanwhile, it seems that Spain may also jump into this fray as Madrid always considered galleons that were transporting gold and jewels from the Americas to Europe as ships of war and therefore its property.

During his visit to Colombia in 2016, Spanish Minister of Justice Rafael Catala said that San Jose is "a Spanish ship because according to the international law a vessel belongs to the country whose flag it was flying on the day of the shipwreck," adding that "hundreds of Spaniards died aboard that galleon."

"We believe that the best course of actions would be to respect the cultural heritage by allowing the ship to rest where it currently is," the minister surmised.

And as Rengifo pointed out, Spain has already several litigations regarding other sunken galleons and their cargo and therefore should definitely not be underestimated.

At this point however it is still unclear which of the three contenders – Columbia, Spain and the US salvage hunters — will ultimately prevail in this struggle for the treasure of the San Jose.