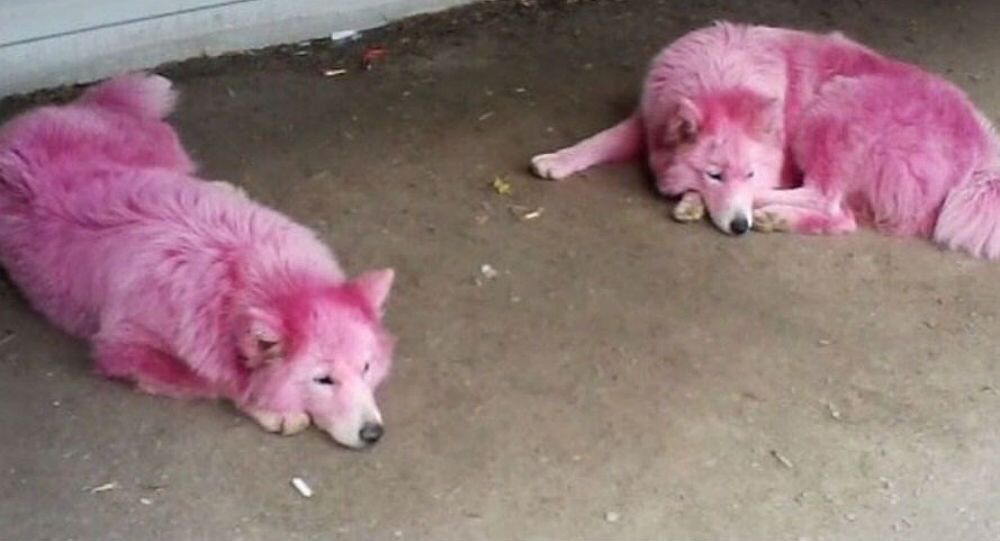 A couple of Samoyed puppies, dyed pink by their irresponsible owners in a Russian seaside resort, were used to entertain tourists and pose for photos; as soon as the dogs grew up, however, they were ditched. This heartbreaking news spread across the internet, and animal rights activists united their efforts to rescue the pink pooches.

© AP Photo / Andy Wong
Police Keep Close Watch During Chinese Dog Meat Festival
According to animal rights activists, several brightly dyed Samoyed puppies were seen in March in Gelendzhik, Krasnodar region. The unusually colorful pups attracted tourists, especially kids, for paid photo shoots. But when the dogs grew up, their inhumane owners decided to ‘give them the pink slip' and get rid of the bright ‘accessories.'

The dogs were left with no food or water in the forest some 60 kilometers away from Gelendzhik, where they lost each other. Thanks to the power of social media, however, internet users raised awareness about the situation, and soon enough some volunteers managed to catch both dogs and find a way to bring them to a dog shelter in Moscow, where they found a permanent new home.

"The dogs were very tender, obedient and kind. How happy they were to see each other again!" Kseniya, one of the volunteers who brought the animals from Gelendzhik to Moscow, wrote in her Instagram account. "But they are very timid and broken-spirited: I just raised my hand next to them, and they clung to the ground instantly. They didn't want to get in the car, and all the way to Moscow they sat close to each other, side by side," the woman added.

The poor animals were mistreated by their previous owners, judging by the condition they were discovered in. According to another activist, Victoriya, the dogs had several injuries, problems with their skin and fur, inflammation and eczema. After they were examined by vets, one pooch had shrapnel removed from the side of his body and another dog was shot in his ear. Activists are also concerned about the dye that was used to color the dogs' snow-white fur, which could affect the animals' health.

The Prosecutor's Office in Krasnodar Region has launched an investigation. Meanwhile, witnesses reported that the same exploitative dog owners were noticed walking along the seaside in Gelendzhik with fresh new colored puppies. Animal rights activists have urged residents and tourists not to support this business and complain whenever the animal abusers are seen.