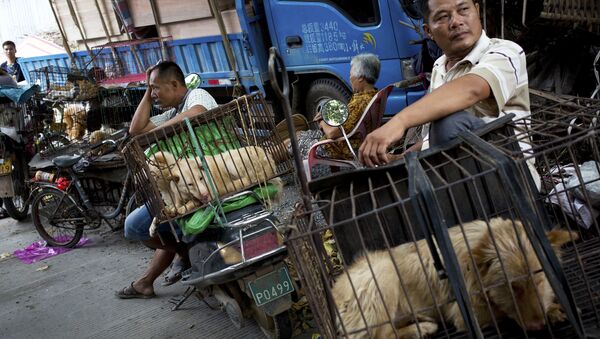 Additional police were deployed in the streets of Yulin, South China's Guangxi Zhuang Autonomous Region, in a bid to prevent vendors from selling and slaughtering dogs on the street during the dog meat festival, which fell on Wednesday. The scale of this year's festival is much smaller compared with previous years.

Vendors couldn't sell dog meat on the main street on Wednesday, where the shops  which previously sold dog meat had replaced dog meat with lamb, pork and other meat.

"By persuading vendors to sell the meat inside the market, police intended to prevent clashes between dog meat vendors and animal rights activists," local residents told the Global Times Wednesday.

In the past, dog lovers and activists clashed with restaurants selling dog meat and dog butchers. While eating dogs has never been a popular tradition all over China, some Western media outlets and animal activists, who hype up the controversy surrounding the event, instigate tensions and put pressure on residents in Yulin to abandon the custom, have made the case even worse.

While the Yulin government cannot mandate an end to the local tradition, it has increasingly paid attention to the controversy surrounding the event and tried to maintain order on the day of the event.

On Wednesday both sides appeared to have kept a low-profile, with the dog lovers quietly making purchase deals, and the vendors no longer butchering dogs at public markets.

Animal rights activists tried to rescue the dogs this year as well by purchasing them from the dog vendors. And some who went to the extreme by resorting to force drew the ire of the local people, while their radical actions of the past motivated people with foul intentions to cheat others.

Tastes Like Chicken: Tourists Eat Meat From 70,000 Dogs Killed in Bali Each Year

Some people posing as "animal rights activists" had tried to defraud other people by seeking large donations. In an advertisement circulating online since Tuesday, an "animal activist group" asked netizens to donate money to save dogs, which he said costs 2,000 yuan ($292) each.

However, according to activists currently working in Yulin, a dog only costs around 150 yuan.

Almost one-fourth of the rescued dogs died during their transit to other places because of disease or wounds, said Su.

This article was written by Zhao Yusha and was originally published in the Global Times.