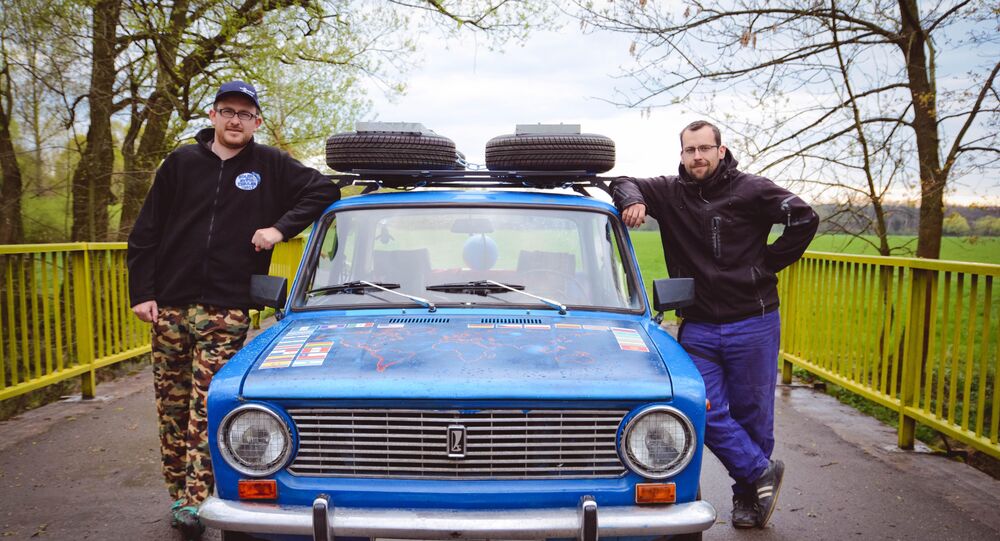 Two 28-year-old Czechs who have embarked on their round-the-world journey in a Soviet-made car which is almost twice as old as them, have already driven through Poland, Lithuania and Latvia and have crossed the border with Russia. Sputnik Czech got a chance to talk to the two travelers during their short stop at a gas station not far from Moscow.

© Sputnik / Dmitryi Donskoy
Around the World in a 40 Year-Old Soviet-Made Car: Two Czechs Plan an Incredible Journey
Filip Vogel and Petr Javurek are touring the word in a 41-year-old Soviet-made VAZ Lada 2101, commonly called the "Kopeyka" (the smallest coin in the USSR and now in Russia).

"We didn't have any problems with the car or the roads. The only thing which was of a total surprise in Russia is the unusually cold weather in April. We've been sleeping in the car and got chilled to the bone by morning. Everything is ok now and we are ready for the drive to Moscow," Filip Vogel told Sputnik.

The two friends plan to travel around 50,000 kilometers and visit about 20 countries on four continents. Filip explained the choice of their means of transport.

"We think that the VAZ 2101 is a legendary car. It was designed for the Soviet roads, for stiff terrains, it is a high-quality and enduring vehicle. We have already driven over 2,000 kilometers in it and hope everything will continue while driving further along the roads of Europe, Asia, North and South America," he said.

The traveler said that the car has a long history. Petr Javurek is its sixth owner. The vehicle has a four-cylinder engine, which puts out 60 horsepower, and can reach 140 kilometers per hour. However nobody knows how much it has already driven as the vehicle and its engine have been completely rebuilt.

"The car was not running, we have been repairing the engine for a long while and have fixed quite a few broken parts. We have two boxes of spares with us as well," he said.

Filip however said that he is sure that in case of any breakdown either in Russia or on the territories of the former USSR, they won't encounter any problems with repairs as there are plenty of similar cars in the streets. He said that his parents also used to own a Lada and he clearly remembers how he used to ride in it as a child.

He said that their trip has no commercial goal, they simply want to see the world and learn more about Russia in particular. Last year they were in St. Petersburg and now they want to visit the remote regions of the Urals and the Far East.

© Photo : Facebook/takeongravity
'Learning to Ride a Bike in 3D': UK Inventor Debuts Real Iron Man Superhero Suit
Their route goes through the Altai Mountains in Central and East Asia, where Russia, China, Mongolia, and Kazakhstan come together, Lake Baikal, the cities of Irkutsk and Vladivostok, where they will leave for the US.

They are also set to visit the city of Tolyatti, also known in English as Togliatti, in southeastern Russia, the site of Russia's AvtoVAZ manufacturer formerly known as VAZ: Volzhsky Avtomobilny Zavod or Volga Automobile Plant, better known to the world under the trade name Lada.

He said that they have been contacted by the employees of the plant who invited them to visit the enterprise to see for themselves where their car was manufactured 40 years ago.

At the end of his interview Filip said that while they were getting ready for the voyage in an old Soviet-made car they haven't heard any hostile or otherwise critical remarks.

"Czechs treat with respect the history of the Volga Automobile Plant, as these cars used to be very popular in our country" he said.