Around the World in a Soviet-Made Car: Two Czechs Plan an Incredible Journey 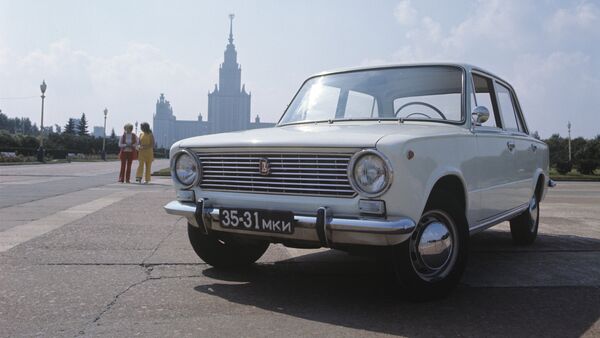 © Sputnik / Dmitryi Donskoy
/
Go to the photo bank
Subscribe
Two 28-year-old Czechs, who have long wanted to tour the world, have finally found an affordable means of doing it: a Soviet-made car which is almost twice as old as them.

'Learning to Ride a Bike in 3D': UK Inventor Debuts Real Iron Man Superhero Suit
On Friday, Filip Vogel and Petr Javurek are set to start their voyage around the word. The two Czechs plan to travel around 50,000 kilometers and visit about 20 countries on four continents in a 41-year-old Soviet-made VAZ Lada 2101, commonly called the "Kopeyka" (the smallest coin in the USSR and now in Russia).

The guys bought the car last June last year and it took them six months to get it into shape and fit it out, Czech website České noviny reports on Wednesday.

"We have not done anything particularly special to it, only installed a protective cover on the bottom of the engine and put a car trunk on top," it quotes Filip Vogel as saying.

Vogel, who is completing his doctoral studies at the Faculty of Civil Engineering of Czech Technical University in Prague, had previously driven through Europe, South Africa, South America and some of the Hawaiian Islands.

World's First Hydrogen Powered Yacht 'Energy Observer' to Sail Around the World
Petr Javurek, who works as a mechanical engineer at an automobile plant in the Czech Republic, is also ready for an adventure.

The two residents of the town of Čestice in the South Bohemian Region of the Czech Republic are planning a to take the Pamir Highway, the Silk Road from Tajikistan to Kyrgyzstan and the so-called death road in the Bolivian Andes.

They plan to regularly post reports of their journey on the internet and expect to get back home by March 2018 at the latest.