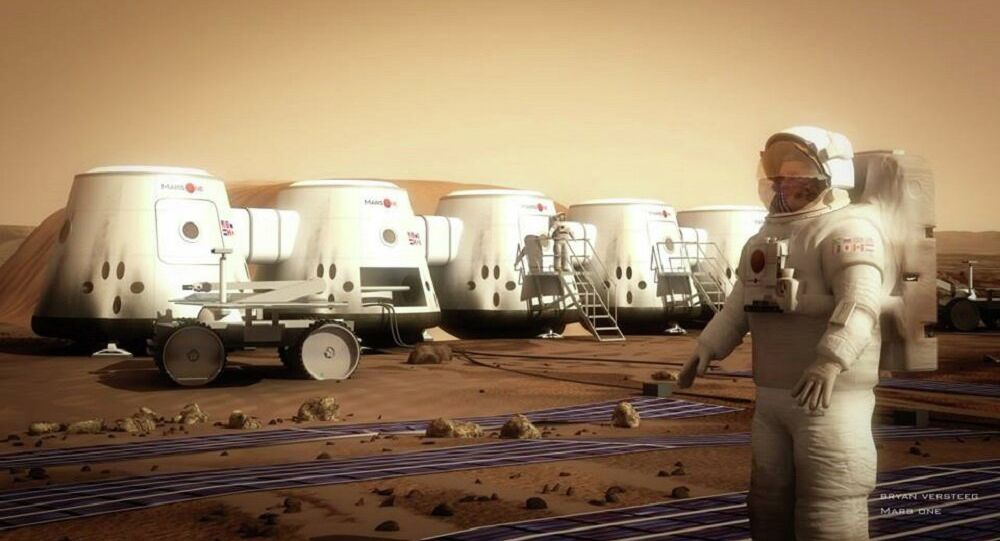 On International Day of Human Space Flight, Mars One project participant Anastasia Stepanova told Radio Sputnik that a human settlement on Mars is closer than we think.

© Photo : Pixabay
No Oxygen? No Problem! Mars’ Volcanoes May Have Created Conditions Ripe for Life
Anastasia Stepanova has wanted to go into space ever since she was a little girl, and hopes that the Mars One project is going to allow her to achieve her dream.

The project was set up Dutch entrepreneur Bas Lansdorp in 2011, and plans to create a human colony on Mars.

According to Mars One, those who are chosen for the mission will go on a one-way trip to Mars, never to return to Earth.

There were thousands of applicants for a place on the mission, who were whittled down to just 100 finalists last year. Anastasia told Sputnik that she is making preparations to give herself the best chance of getting through the selection process.

"There were 200,000 of us, and now there are 100. There should be 24 people left in the final. They will travel to the base, sign a contract with Mars One and then they will work for them, get paid and train constantly. It's like a cosmic star factory," she explained.

Anastasia said that Lansdorp and the other leaders of the Mars One project are trying to raise the required financing to reach Mars.

"I know him (Lansdorp) personally. I believe in deeds, and now I'm waiting for them. They (Mars One) have received $6 million from Chinese investors for the first stage. That is, for qualifying rounds, preparing a prototype for our station, spaceships and so on, because all that costs money. Then, they are trying to figure out how to attract more financing. This is a very complicated scheme… I wouldn't call him a rich man, he has already spent all his money (on the project)," she said.

© Sputnik / Kirill Kallinikov
Anastasia Stepanova
Anastasia and the other hopefuls have had to pass a series of tests, but the toughest trials are yet to come.

"There have been general medical examinations, psychological tests and tests about knowledge of the planets and the Mars One project. There haven't been any serious tests yet, that will be during the next stage with all 100 participants. Several locations are being considered: it might be in Jordan, where they will give us two weeks of tests on teamwork, how fast we learn new material and our reactions under extreme conditions," she revealed.

Anastasia is going to spent her summer in the Arctic in preparation for the grueling selection process. She said that her friends and colleagues have tried to dissuade her from going into space, but she remains as determined as ever.

© Photo : Boeing
Fly Me to the Moon and Then to Mars, Boeing: Defense Firm Expands Space Plans
"My plan for the summer is to go to the Arctic, that's how I'm going to spend my summer. When I get back, I'm starting my studies – I'm doing a second degree in robotics and mechatronics."

As well as being an avid reader of science fiction, Anastasia loves watching sci-fi films, too. One of her favorites is the recently-released Russian film, "Sleepwalker," which tells the story of the first ever spacewalk in 1965.