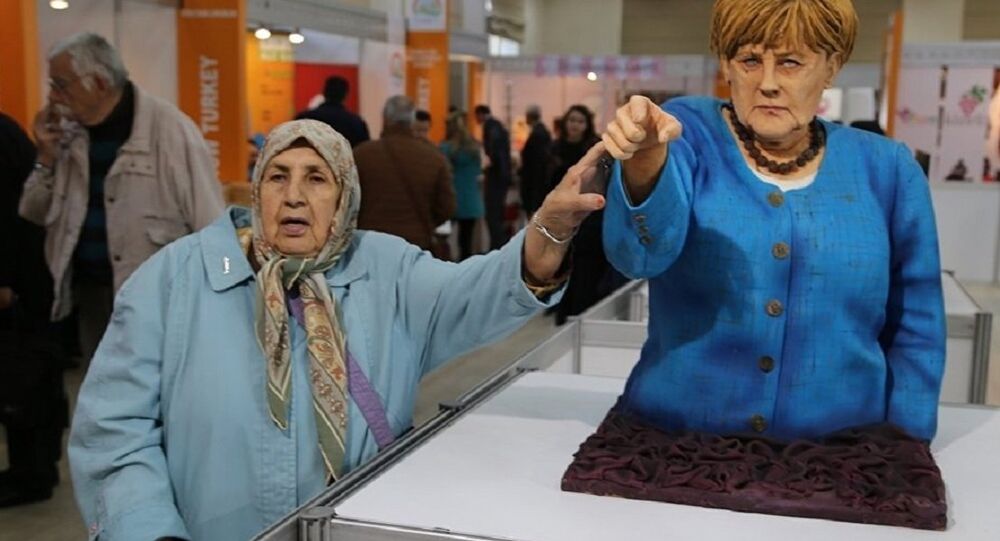 The Festival of Chocolates, Sweets and Cakes was held for the first time on March 24-26 at the Military Museum in Harbiye, Istanbul. According to festival organizers, 42 confectionary companies presented their sweet products at the festival; but all eyes were on Angela Merkel and Donald Trump, whose figures were made of cake icing.

The sweet cake busts of the German Chancellor and the US President attracted the most attention: guests of the festival enjoyed taking selfies with the delicious dignitaries, as Turkish media reported.

© Photo : AA/Hikmet Faruk Baser
The cake bust of US President Donald Trump by Turkish confectioner Tuba Geçkil displayed at the Festival of Chocolates, Sweets and Cakes in Istanbul.
Youtube / Sputnik
How Sweet! Russian Company Launches Trump Edition Sugar Brand
Confectioner Tuba Geçkil, the baker of those cakes, revealed that she used 50 kilos of sugar paste to make the sculpture of Angela Merkel.

"I wanted to draw attention to Merkel's personality. The finger extended forward is her distinctive gesture; and I wanted to demonstrate her harsh temper," Geçkil told local media.

​It took the confectioner a month to make the cake in the form of the German Chancellor, while "edible Mr. Trump" was ready in just two days. The hardest part in the Merkel-style cake was the hair and eyelashes, Geçkil explained.

Festival organizer Orhan Saatçıoğlu noted that the main goal of the festival was to introduce visitors to chocolate culture: "The culture of chocolate comes to us from the West, and our goal is to cultivate this culture in our country. The visitors of the festival were able to discover new tastes here. We also held various entertainment events and competitions during the festival."

© Photo : AA/Hikmet Faruk Baser
A visitor of the Festival of Chocolates, Sweets and Cakes in Istanbul takes a picture of the cake bust of Senior Master Sgt. Ömer who heroically lost his life during the coup attempt in Turkey on July 15, 2016.

Saatçıoğlu also shared his plans to make this festival a tradition and transform it into a bright carnival within three years.