Last weekend, snowplows in the Swedish town of Södertälje were attacked by rockets and firecrackers. Since then, street sweepers have gone on strike, leaving the city littered with snowdrifts. Meanwhile, the pyrotechnical chaos has left the Swedish fireworks industry perplexed. 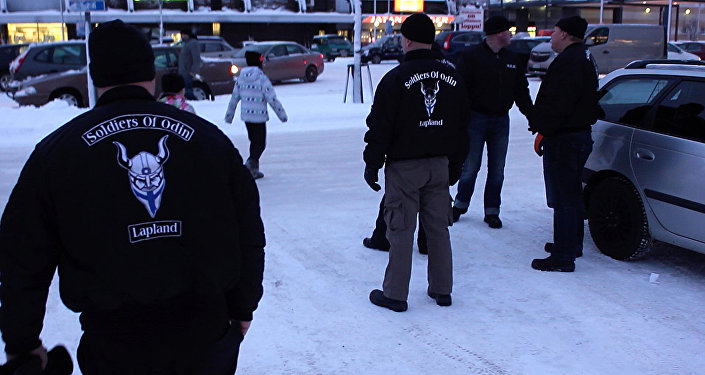 © AFP 2019 / Sam Kingsley
Swedish Militant Leftists End Up in Police After Brawl With Nationalist 'Soldiers of Odin'
The Södertälje attacks were reported to police, who at present have no suspect and no leads. So far, Södertälje Municipality has received about a 100 complaints regarding poor road conditions, with virtually no snow removal in parts of the town at all.

"I cannot go out with my pram the way it looks now," local mother Hadeel Faruok complained to Swedish national broadcaster SVT over pavements that remain unshoveled and unsalted.

So far, Södertälje Municipality has shown surprising understanding for the striking street sweepers.

"I fully understand that our contractors do not want to plow the snow when people are firing rockets at them. I myself have never seen anything like it," the municipality's winter planner Mats-Ola Svensson told SVT.

"Personally, I think it's a good solution, the [security] situation here is exhausting, and my own car got burned up. Besides, it is important to get snow shoveled here, since many older people need to get out. A few guards can't hurt," local resident Ernest Iyagbo told SVT.

Previously, a YouTube clip about New Year celebrations in Malmö, which was made by Jash Doweyko-Jurkowski and featured individuals deliberately shooting fireworks into the crowd, startled Sweden. According to Doweyko-Jurkowski, the fireworks chaos in Malmö is far from unique.

"New Year's celebrations have become notorious for the chaotic and haphazard fireworks display. People are more or less prepared for what is about happen," Doweyko-Jurkowski said, as quoted by Finnish newspaper Hufvudstadsbladet.

Remarkably, police officers and security guards find themselves victims of deliberate fireworks attacks. In Gothenburg alone, over 50 explosives attacks against police have been recorded since New Year. Police Federation chairman Lena Nitz argued that it should be made clear that attacks against police personnel are unacceptable.

© AFP 2019 / JONATHAN NACKSTRAND
Multicultural Cops Take to the Mean Streets of Sweden
According to Swedish newspaper Svenska Dagbladet, some of the fireworks attacks are carried out to divert police attention from drug sales, whereas others are performed by rowdy youngsters with no specific agenda apart from a strong dislike for the police force.

The fireworks chaos around the New Year, when pyrotechnics were directed against people, animals and traffic, has alarmed the Swedish Fireworks Industry Association (SFB), prompting it to suggest a ban on classical fireworks, which may prove harmful if shot in a dangerous and reckless manner.