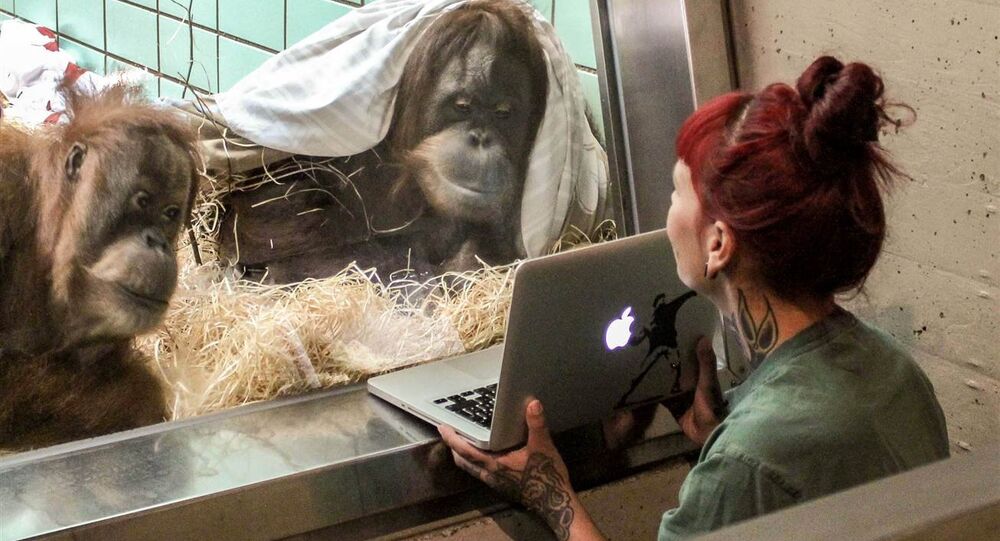 Love Blossoms for Orangutan Couple Who Hooked Up Via Video Dating

A couple of orangutans in Germany have begun a new life together after finally meeting in person following months of video dating, Germany's RTL television station reports.

© Flickr / Jordi Payà
‘Non-Human Rights’: Argentina Judge Orders Chimp to Be Set Free
Female orangutan Simpa, who lives in Stuttgart zoo and Gempa, from a zoo in Belgium, had only seen each other by video before they eventually met earlier this year.

The pair was initially shy when they eventually met in Stuttgart, zoologist Marianne Holtkoetter told RTL.

"But then Gempa simply didn't want to leave Simpa," she said, adding that the zoo is hopeful of a positive pregnancy test.

"Orangutans are different from other apes, they are sensitive and observant of others."

Holtkoetter explained that orangutans also develop relationships with their zookeepers, and that the zoo in Stuttgart tries to give the animals the chance to choose their own partners.

© Photo : YouTube/ CCTV News
Baby Monkey Adopted by Family of Goats in China (VIDEO)
The relationship between the pair has been slower to progress than that of Sinta and Gempa, but zookeepers remain hopeful that Conny will get pregnant.

Orangutans are the only Asian species of great apes, and the world's largest tree-climbing mammal. They are an endangered species, and it is hoped that this unconventional way of meeting will help to increase their number.

Orangutans can live up to the age of 50 in the wild. They reach sexual maturity between the ages of ten and 15 years, usually give birth to a single young, or occasionally twins, and the interval between babies is between five and ten years.

These factors mean that orangutans have an extremely low reproductive rate, and their population takes a long time to recover from population declines.

According to the WWF, there are about 63,500 individual orangutans, and their population has declined by more than 50 percent over the past 60 years, as their habitat has been seriously affected by deforestation and illegal hunting.

Their natural habitat is limited to the rainforests of two islands in south-east Asia, Sumatra and Borneo. Orangutan means "person of the forest" in the Malay language.

Chimpanzees May One Day Have Rights - New York Judge