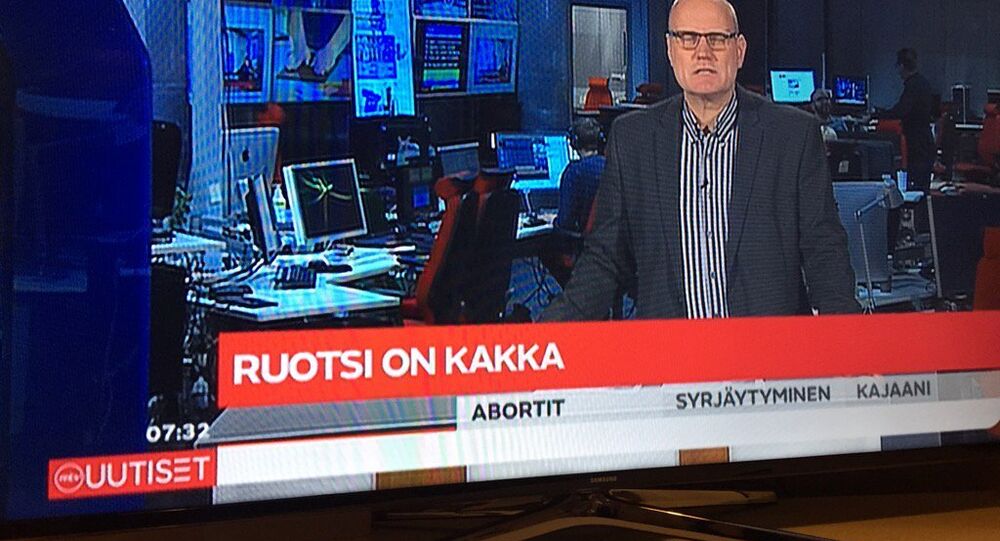 As much as Finns and Swedes, like all neighbors, try to maintain a healthy and mutually beneficial relation, they also delight in badmouthing each other. A Finnish TV channel proved this point by casually insulting Sweden earlier this week.

Finnish TV station MTV3, which has no relation to the entertainment channel, opened its 7.30AM news with an unexpected text, which read "Sweden is s*it." The text appeared when anchor Jouni Sipilä was through with his report about Donald Trump's plans to pull out of the Trans-Pacific Partnership and moved on to the recent earthquake and the subsequent tsunami warning off Japan's Fukushima, Finnish newspaper Ilta-Sanomat reported.

​​After several seconds, the text disappeared, but attentive viewers managed to catch the message and even make some screenshots. In no time, the hashtag #ruotsionkakka soared in popularity.

"So this is how we preserve good relations with our western neighbor," a Finnish Facebook user quipped.

© Sputnik / Vitaliy Ankov
Russian Language Study Grows in Finland Despite Sanctions Stand-off
Anchor Jouni Sipilä, who, judging by his facial expression was seemingly unaware of the offensive text, admitted that a "remarkable episode" had occurred. Merja Ylä-Anttila, MTV editor-in-chief, chose not to leave any comments.

Although Finns and Swedes overall enjoy a hearty and peaceful neighborly relation, Swedes are a recurrent topic of Finnish jokes and jibes. This love-hate relationship is perhaps best encapsulated in the perennial rivalry between Finnish and Sweden national ice hockey teams, which are colloquially known as "The Lions" and "The Three Crowns." Furthermore, the Nordic countries' hundred-year-long common history is by some Finns viewed as "Sweden's 500-year-long occupation," whereas others view Swedes as having a "big brother complex" and a condescending attitude.