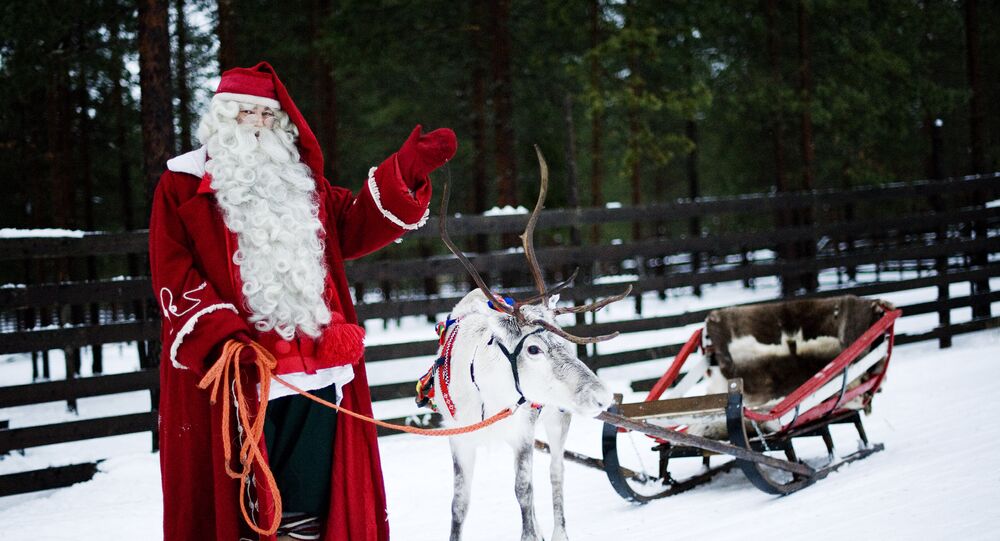 Amid Finland's budget being pressed for funds due to the recession and ongoing sanctions war with Russia, the Finnish Defense Forces were caught red-handed spending money on entertainment which clearly has no connection with defending the nation. An internal army report uncovered a trip to Santa Claus, followed by a sumptuous banquet.

© AP Photo / Bob Martinson
Dream Job in Finland: Hotel Hires a Person to Watch Northern Lights
Auditors became particularly upset with the Defense Forces extravagant spending on excessive wining and dining. According to examiners, the Finnish army spent over 13,000 euros on a "reception" at Hartwall Areena, organized by the General Staff HQ and attended by 148 people, of which only 43 were related to the army. Almost 30 percent of the money was spent on liquor, Finnish national broadcaster Yle reported.

Another interesting expense was a Christmas trip to the Santa Claus village in Lapland. The trip, which according to the military documents was designated as a "military exercise" and a "conference with army officials," involved more than 400 people. However, the two-day program included only 50 minutes of training, and was full of festivities, which could have set Finnish Army budget back hundreds of thousands of euros.

​Criticism was also directed at a military conference at the four-star Scandic Rosendahl Hotel in Tampere, where only 28 of the 43 participants were related to the army.

The internal audit also slammed a logistics center anniversary, which was organized in June and attended by 270 people. The complaint was that alcohol-related expenses exceeded the allowable standard of 30 percent of the total outlay.

© Photo : Polisen Huddinge facebook
To Serve and Dress Up: Swedish Police Got Caught in Wardrobe Malfunction
Finally, the Finnish Defense Intelligence Agency was also found to have overspent at one event, but its details remain classified due to a higher level of secrecy. Nevertheless, auditors ranked the money management of the army units in question as "tolerable," the second-worst grade on a five-point scale.

"Events connected to representing the organization should stand up to public scrutiny, so that every citizen should feel that the offered level of hospitality was appropriate," Forsman told Yle.

Mikko Soikkeli, Director of the C5 agency, which provides IT services and defends army servers from cyber warfare, waved aside the auditors' criticism. According to him, the C5 happens to have a unit in Rovaniemi, which is where Joulupukki (Finnish Santa) happens to have his official residence. Accordingly, it is "only natural" to meet there once in a while.

​According to Transparency International's Corruption Perceptions Index, Finland was ranked the second-least corrupt country in the world after Denmark in 2015.