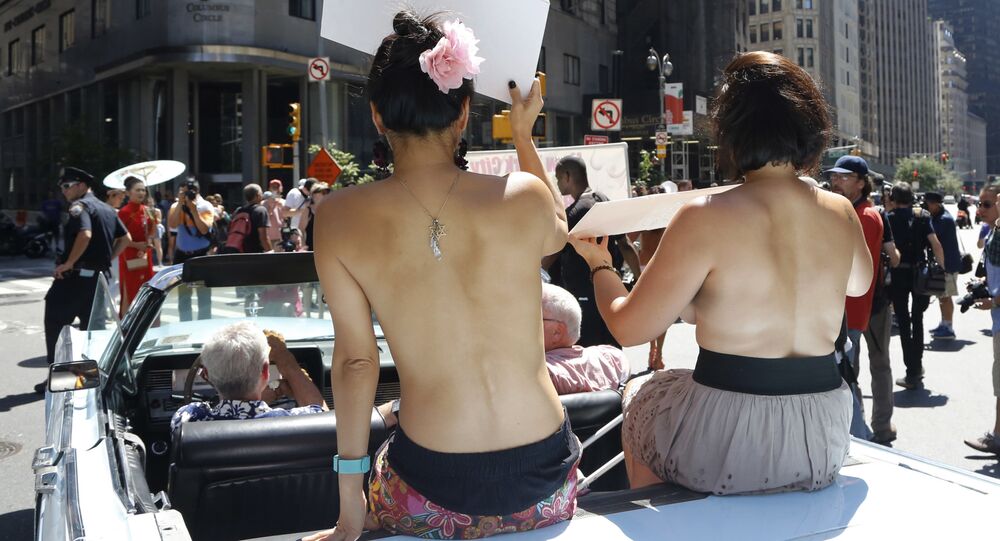 The organizers of GoTopless Day are members of a UFO cult which campaigns for sexual liberation and is seeking new members, anti-sect campaigner Roger Gonnet told Sputnik.

Rachel.Adams
Free the Nipple: Topless Bernie Sanders Protesters Sue Over Rally Arrests
GoTopless Day took place in the US on Sunday, when women in cities across the country took off their top and bras, baring their breasts to demonstrate that women should have the right to go topless in public, just as men do.

"The more you repress a body part, the more obsessed you become about it," Nadine Gary, president of GoTopless, told San Francisco news website SFGATE.

As well as San Francisco, demonstrations took place in other cities including New York, Chicago and Washington D.C.

However, as SFGATE reported, Nadine Gary is not only a feminist activist, but a priestess of the Raelian religion.

In fact, the GoTopless organization was established in 2007 by Frenchman Claude Vorhilon, who is also known as Rael.

Before turning his attention to issue of toplessness, Rael was known for establishing Raelism, a UFO religion, in the 1970s.

Rael was working as an automobile journalist when he was allegedly visited by aliens called Elohim. According to Rael, the Elohim chose him as their ambassador to Earth, and instructed him to create their embassy on this planet.

The resulting Raelian movement teaches that life on Earth was scientifically created by a species of extraterrestrials, called Elohim.

French writer Roger Gonnet, who campaigns against sects including Raelism and Scientology, told Sputnik that rather than being motivated by support of feminist principles, Sunday's GoTopless event was no more than a recruitment drive for the Raelists.

"This is all advertising for Rael. He is trying to attract people, particularly men, by showing women who are presented as Raelists," Gonnet said.

© Photo : Bogdan Bortakov
Busted: Ukrainian Politician Sneaks Peak at Topless Men During Rada Session
According to Rael, he disseminates the philosophy of the Elohim on Earth. Campaigns undertaken by the Raelian movement include support for GM food, and human genetic engineering. The Raelist movement has liberal views on sexuality, and professes to be "in favor of sexual freedom."

In 2007, Rael was denied residency in Switzerland on the basis that his organization is a threat to public morals. The Swiss authorities argued that his campaign to liberalize sex education for children would lead to child abuse.

In 2003, he was denied entry to South Korea because of his links to the human cloning organization Clonaid. In 2002 Clonaid announced that it had produced the world's first cloned human baby, but failed to produce any proof.