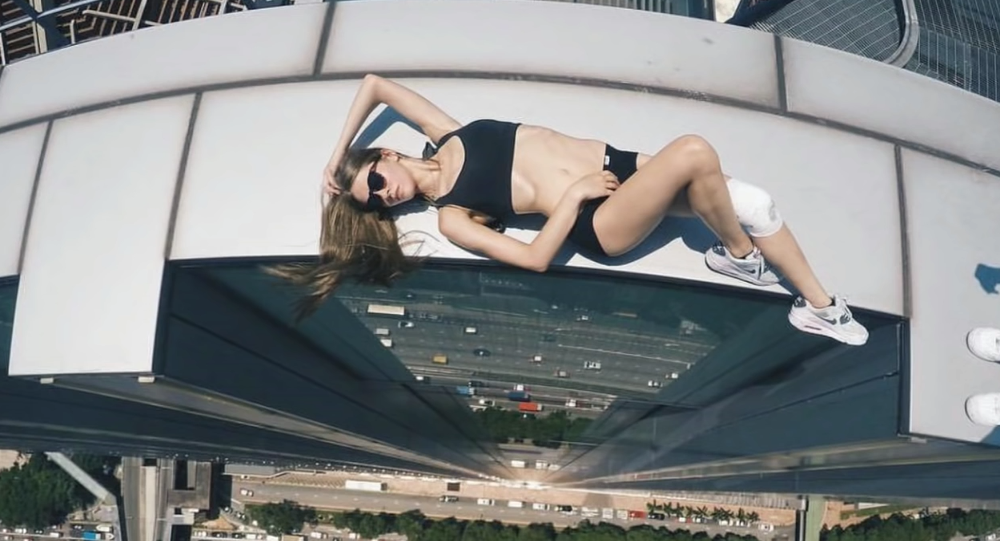 Meet the Russian Girl Who Takes Most Extreme Selfies Ever

Angela Nikolau is a 23-year-old Russian amateur photographer who takes the most dangerous and riskiest selfies ever. She is an absolute heights and adventure junky. Her Instagram photos range from standing on the edge of a high-rise building to laying down on the edge of a skyscraper. Sputnik spoke with Angela in an interview.

Talking about her unusual hobby, Angela said, “I started to climb roofs in 7th or 8th grade. At that time I didn’t have a camera or even a mobile with a camera.”

“In 2013 I became acquainted with like-minded people and they began to take pictures of me on the roofs. Later on, I acquired a small action camera and began to put up my photos on Instagram,” Angela said.

She further spoke about how she has to bypass security cameras, guards and alarm systems because officially she does not have any permit to climb the roofs.

“I often go with my friends and we do not have any insurance,” Angela noted.

From the early age of 4, Angela went to artistic gymnastics classes. “This training has helped me a lot in life and of course it helps in climbing and pulling my weight up, etc.”

“There was fear before but now I am accustomed to it and there is no fear, though recently we, I and Ivan Kuznetsov, my partner, climbed the highest construction in the world, which is located in China and has a height of 640 meters. I had to stand on the roof for 5 to 10 minutes to get used to a new height and only after that we went to the jib crane,” the photographer explained.

Talking about her family’s reaction to her very risky passion, Angela said that her parents are okay with it but they request her to be careful and not to make this hobby into her life’s aim.

“However, to my grandparents I have to say that it is Photoshop so that they do not worry too much!” Angela said.

Regarding the risk that she takes to get a perfect photograph Angela said that she knows her boundaries and does not attempt to do what she doubts she can manage.

Currently, Angela lives in Moscow. She is an artist and teaches young children art. She has more than 150,000 followers on Instagram.

What Russian City Should You Visit?

'They Stole My Dream': Russian Paralympic Athlete Reacts to Ban From Rio Games