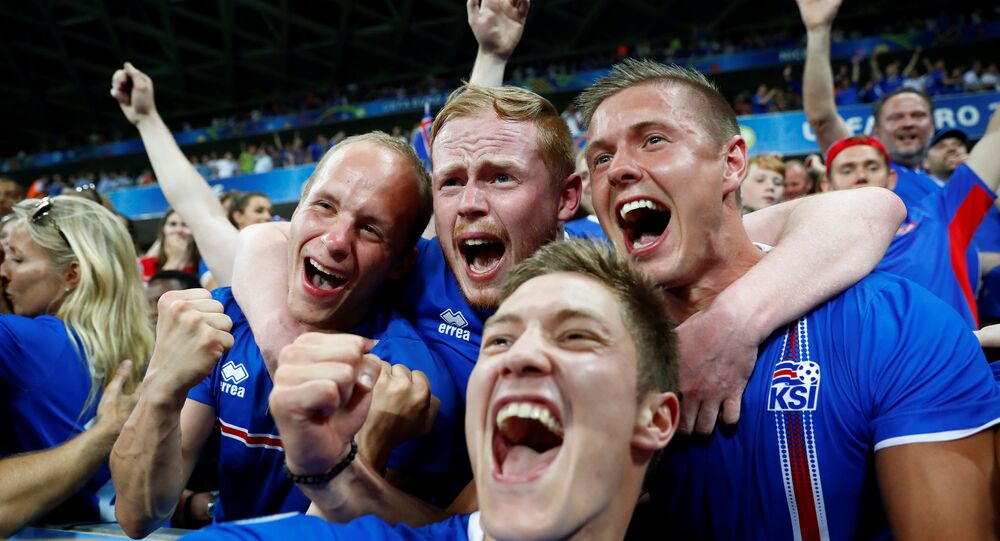 Iceland has undoubtedly made the biggest splash at the UEFA Euro 2016. The tiny island nation's football team's sensational exploits resulted in a jackpot both on and off the field. So far, the brave Viking squad has pocketed 14 million euros in prize money.

© AP Photo / Adam Butler
Iceland Consoles Sore English Football Losers With Whale Safari
After securing a dramatic draw with star-packed Portugal and theatrically knocking out perennial favorites England in the round of 16, the plucky islanders are now getting ready to slaughter another superpower, this time the host country France. Remarkably, Iceland's sporting prowess is matched by its economic gains. According to the Swedish newspaper Dagens Industri, Icelanders' football feats have so far yielded the island nation of 330,000 14 million euros in prize money from UEFA.

For the diminutive island nation, which has never before played in a major championship, the money is more than welcome.

"Football-wise it is flush with our best performance with in the Swedish national team. But it is clear that it feels better because we were ranked as an underdog, which is why it means a lot for the nation. Even the [Icelandic] president said that this will have positive effects for the society at large. Having contributed to it makes you even happier," Iceland's Swedish coach Lars Lagerbäck told the Swedish national broadcaster SVT after the historic 2-1 victory against England.

© Sputnik / Yuryi Abramochkin
National Idol: Norway Wants to Adopt Iceland After Its Football Exploits
If Iceland manages to dispatch the French on Sunday, the Icelandic Football Association seizes an additional 4 million euros. The total prize money for the Euro 2016 winner, provided that the team won their group matches will amount to 27 million euros. UEFA has pitched in much more money for this year's edition of the European Championship, mainly because there are more participants than before. In total, the teams will share a total of 301 million euros, compared to the 196 million euros from Euro 2012 in Poland/Ukraine.

As France and Iceland are about to clash in the quarterfinals, French swimmer Yannick Agnel, who won three Olympic golds in 2012 and holds the world record for the 400 meters freestyle has pledged to swim around Iceland in case of an Icelandic Euro victory, claiming that the islanders football saga has come to an end.

"If Icelanders win the European Championship, I will swim around Iceland," Agnel wrote on Twitter.

​Meanwhile, Twitter user epitomz has calculated that the whole swimming trip would take 28 days, provided that Agnel managed to keep up an average speed of 3 km/h.

​Iceland's unexpected success has taken Europe by storm, the little island nation seems to have caught an acute football fever. All but 650 of the island's 330,000 inhabitants followed Iceland's achievement against England, Swedish Aftonbladet earlier reported.

Icelandic Commentator Loses It After His Team's Winning Goal