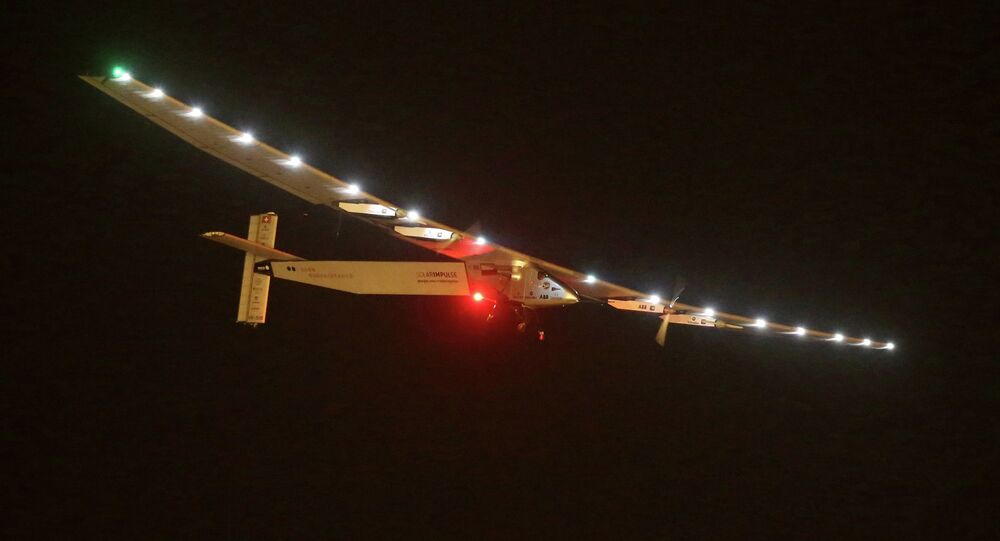 The Solar Impulse 2, a Swiss plane powered only by the energy of sun, has become the first aircraft of its kind to cross the Atlantic Ocean.

Crossing the coast at Faro after 3 days above the Atlantic with @solarimpulse pic.twitter.com/sSiPbvcbSz

Good morning #Seville! Do you have a lot of direct flights from #NYC? 😉 #futureisclean pic.twitter.com/ZCSMOOgva4

​​The plane touched down in Seville, Spain, on Thursday, at 1:38 AM, local time, after leaving New York City three days before. The event marked the completion of the 15th stage of the aircraft’s round-the-world trip.

"Everybody has tried to cross the Atlantic, with sailboats, steamboats, airships, aeroplanes, even rowing boats and kitesurfs. Today, it's a solar-powered aeroplane for the first time ever, flying electric, with no fuel and no pollution," Bertrand Piccard, one of the two pilots, said to reporters upon landing, as quoted by BBC.

The Swiss pilots, businessman André Borschberg and psychiatrist Piccard, are also the entrepreneurs who funded the project. The stated goal was to fly a piloted, zero-fuel aircraft around the globe to promote clean technologies.

We want to represent the new world, the world of #cleantechs. Because the #futureisclean & it starts now! 🔆 pic.twitter.com/ZplUGD4LsS

​During the course of the experiment, two Solar Impulse aircraft have been constructed. The first was tested in 2011-2012 and successfully completed a journey from Switzerland to Spain and then Morocco.

A second version, completed in 2014, was modified for longer journeys. The Solar Impulse 2 has a wingspan of 72 meters, more than that of a Boeing 747. The wings are covered in 269.5 square meters of photovoltaic cells, supplying energy to four engines and four lithium-ion batteries onboard the plane.

For me, #Si2 is alive and is an old friend with whom I've lived many crazy experiences to prove #futureisclean pic.twitter.com/dj5ejJSyDz

​When the sun is up the energy for the engines comes straight from the solar collectors. At night the engines are driven from the batteries. The source of power affects the speed of the aircraft. In daylight the Solar Impulse 2 is capable of speeds of up to 49 knots (90km/h). At night, the maximum speed is 33 knots (60km/h).

The onboard photovoltaic cells cannot recharge the batteries during the flight, so the plane needs to be fully recharged on land during a period of rest.

The Solar Impulse 2 can remain in the air for six days in a row, under certain energy-saving conditions. For that purpose the pilot cockpit is unheated and unpressurised, and seats one person.

The journey began in March 2015 in Abu Dhabi, UAE, and was expected to be completed the same year. But in June 2015 in Hawaii, the plane broke down and the pilots required over six months to make repairs. Flights were resumed in April 2016.

Under the trip plan, after departing from Spain, the Solar Impulse 2 will head for its final destination in Abu Dhabi.