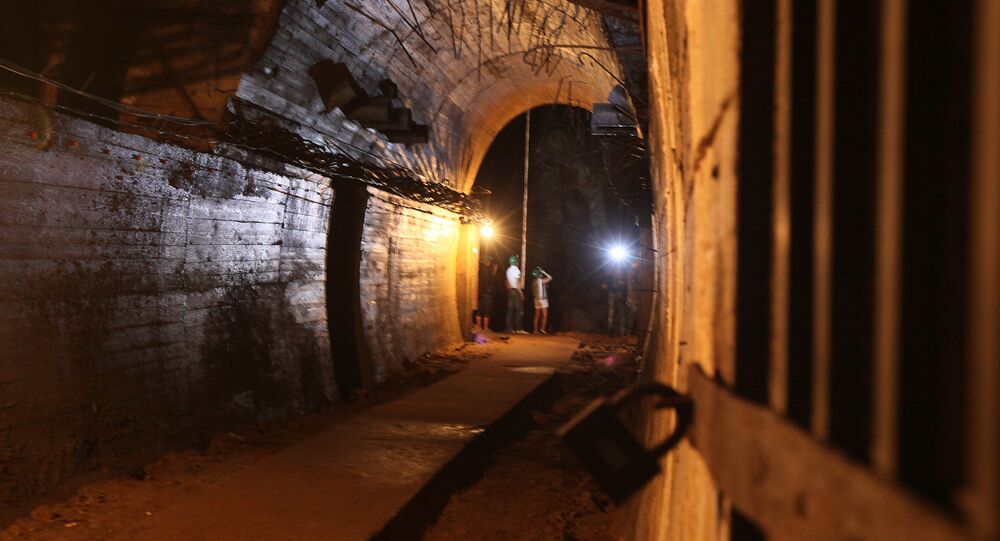 Last August, the media was abuzz with reports of a Nazi gold train, loaded with precious metals and antiquities and hidden in the region of Lower Silesia, in Poland.

© AP Photo / PIOTR HAWALEJ
Poland Still on Hunt for Missing Millions on Nazi Gold Train
The mystery behind the train still remains unresolved. While amateur researchers were 95% sure that they had found "something big" underground, which they believed was the mysterious Nazi gold train, scientists from the University of Krakow came to a different conclusion. They stated there was no train in the area and assumed that gold hunters might have been misled by underground cables extending near the railway.

However, despite the opinion of experts, adventurers continue their search. Although the story with the train has already been called a cheap PR-move aimed at attracting tourists to a relatively poor region of the country, many believe that the treasure really exists and is still hidden somewhere in the area.

"Perhaps, it is too early to deny the fact that a gold train or some other Nazi treasure might be really hidden in Lower Silesia," the Swedish newspaper Expressen wrote.

In his article, Marcus Wallen described how the largest Silesian castle of Książ and its territories were confiscated by the Nazis in 1944 and became a place for large-scale underground construction works.

"Everyone knew that they built some kind of a house for Hitler there," says Dorota Stempowska who lived in the castle as a child.

© AFP 2020 / JANEK SKARZYNSKI
Mystery About Polish Nazi Gold Train Intensifies After Recent Test
According to the newspaper, it remains unknown whether the Germans managed to finish the construction project, and how far they had come forward in their plans. However, a huge network of tunnels, railways and air conditioning vents shows that the Nazi project was a huge underground city that later gave way to a large number of myths.

The project was code-named "Riese," which can be translated from German as "Giant." Its true purpose still remains controversial.

The few available documents say that the complex was supposed to be a huge hiding-place for the elite of the Third Reich. Some of them have also suggested that it was designed as a hangar to build aircraft, while the tunnels were supposed to hide the factory for the production of weapons.

"We know little about the ‘Giant' project. There are almost no documents or drawings, that could give new information," the newspaper wrote. "However, it is clear that the building process was a top priority, as evidenced by the data concerning the safety and secrecy of the project. The area was guarded by four thousand SS officers who received the order to kill anyone who came too close to the site."

The complex consists of at least seven separate parts, with total area reaching over 190,000 square meters. The exact figure is unknown as gold hunters and old miners are constantly discovering new tunnels.

"Who knows, maybe the gold train or the treasure […] is stored in one of the tunnels, which still remain hidden from human eyes. One of the theories says that even having realized that the costly project would not be implemented, the Nazis nevertheless sought to benefit from it, turning it into a huge depository," Wallen wrote.

The Hunt for the Nazi Gold Train in Poland