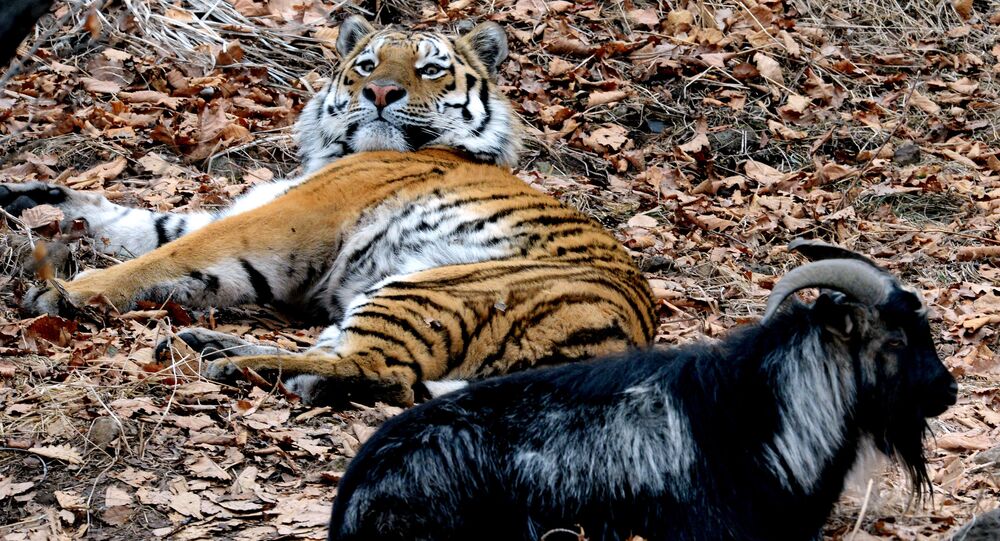 The two friends, Timur the Goat and Amur the Tiger, from a safari park in Russia’s Far East Region are becoming international celebrities – the strange pair of friends is going to have accounts on Chinese social media, according to a statement published on the website of the safari park.

"On February 7, Chinese social networking sites will open two accounts dedicated to Amur and Timur in the Chinese language. We congratulate the Chinese, our neighbors, with the Chinese New Year," Dmitry Mezentsev, the director of the Primorsky Safari Park said.

At the end of December 2015, the tiger and the goat got their own accounts on social media, including the Russian sites Vkontakte and Odnoklassniki.

© Sputnik / Vitaly Ankov
Unusual Friendship Between Tiger and Goat to Go on Air as Reality Show
Their Instagram account alone has close to 18,000 followers.

Amur and Timur became friends on November 26, when the goat was thrown into the tiger's cage as his would-be meal. What ended up happening, however, surprised the whole world: when Amur tried to attack Timur, the goat charged back fending off the predator. That really put off the tiger, which quickly lost his predatory interest and stopped seeing the goat as a prey. Soon after that the two became inseparable friends.