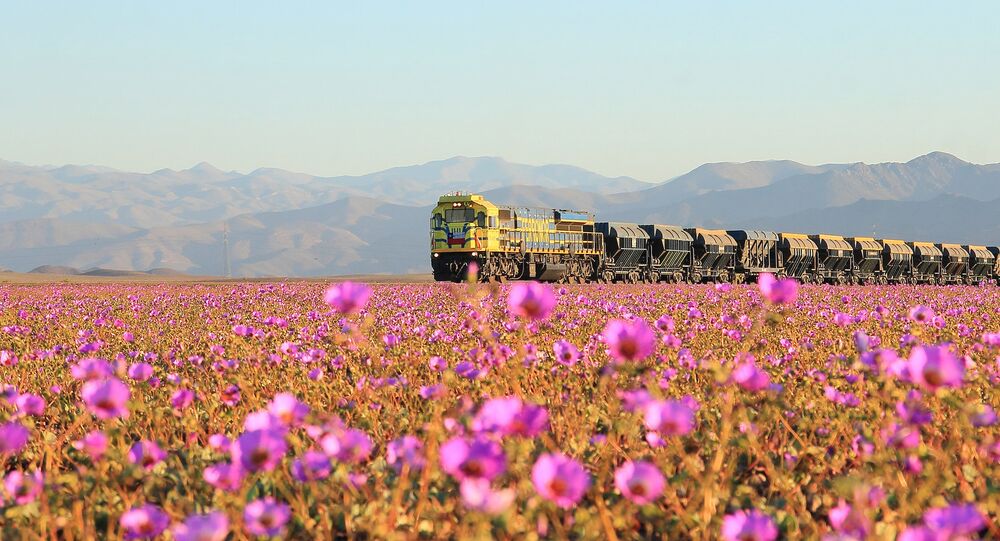 The driest desert of the world, the Atacama, located on the Pacific coast and covering 1,000 kilometers of Chilean land, has suddenly turned into a gorgeous carpet of wildflowers, after El Nino, a periodic warming in sea surface temperatures across the Equatorial Pacific, brought the heaviest rainfall in two decades earlier this year.

The Atacama Desert is usually one of the driest places on Earth.

However this year it once again turned into a stunning carpet of wildflowers.

© AFP 2021 / CARLOS AGUILAR
Flowers bloom at the Huasco region on the Atacama desert, some 600 km north of Santiago. (File)

Such a phenomenon occurs when rainfall helps germinate dormant seeds, allowing flowers in the usually barren desert to bloom. This particular phenomenon is called desierto florido, or flowering desert.

The Atacama Desert has well over 200 different species, with herbs being the most popular to bloom – mallow is the most dominant of these flowers and comes in perfect shade of pink.

This desert bloom occurred after El Nino, a periodic warming in sea surface temperatures across the Equatorial Pacific, brought the heaviest rainfall in two decades earlier this year.

The rains caused mudslides and floods, killing 28 people and leaving thousands of others homeless.

But it also transformed the desert into a colorful carpet of flowers.

© AFP 2021 / CARLOS AGUILAR
Flowers bloom at the Huasco region on the Atacama desert, some 600 km north of Santiago

"The Atacama region was punished, but also blessed by the phenomenon of a flourishing desert, something that happens only after the rains, this time brought about by El Nino and climate change," EFE news agency quotes Daniel Diaz, the National Tourism Service director in Atacama, as saying.

© Flickr / El ojo etnográfico
The flowering desert is a climatic phenomenon that occurs in the Atacama Desert, Chile

Flowers normally bloom every five to seven years but this year’s showing has already been called one of the most spectacular.

"The intensity of blooms this year has no precedent," Diaz said. "And the fact that it has happened twice in the same year has never been recorded in the country's history. We are surprised."

The blossoms are expected to disappear in November.